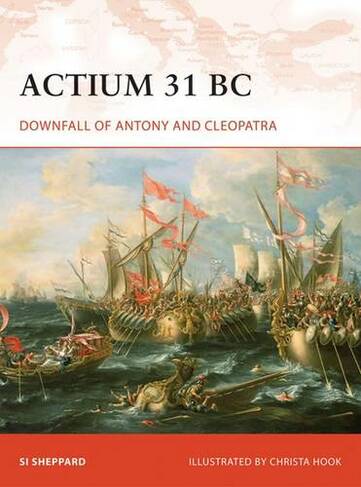 Actium 31 BC: Downfall of Antony and Cleopatra (Campaign No. 211)

In 32 BC, the Roman Republic descended into Civil War between the forces of the Octavian in the west and the famous lovers Cleopatra and Marc Antony in the East. Acting quickly, Octavian managed to trap his foes in the Gulf of Actium. In the ensuing battle, Anthony and Cleopatra manage to escape, but their military forces and their hopes for victory in the war were crushed. Soon afterward, the lovers committed suicide, and Octavian dissolved the republic and declared himself Emperor. Actium has remained one of the most famous battles of the ancient world thanks to Shakespeare and Hollywood. This new book tells the true story of the decisive and bloody battle that would once and for all seal the fate of the Roman Republic. Illustrations (chiefly col.)

Si Sheppard graduated this year with a Ph.D. in political science from Johns Hopkins University. He currently teaches American Government at Long Island University in Brooklyn, New York. This is his second Osprey title in a projected trilogy detailing the fall of the Roman Republic and the rise of the Empire.