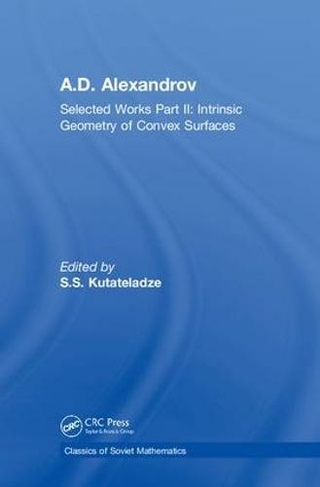 A.D. Alexandrov is considered by many to be the father of intrinsic geometry, second only to Gauss in surface theory. That appraisal stems primarily from this masterpiece--now available in its entirely for the first time since its 1948 publication in Russian. Alexandrov's treatise begins with an outline of the basic concepts, definitions, and results relevant to intrinsic geometry. It reviews the general theory, then presents the requisite general theorems on rectifiable curves and curves of minimum length. Proof of some of the general properties of the intrinsic metric of convex surfaces follows. The study then splits into two almost independent lines: further exploration of the intrinsic geometry of convex surfaces and proof of the existence of a surface with a given metric. The final chapter reviews the generalization of the whole theory to convex surfaces in the Lobachevskii space and in the spherical space, concluding with an outline of the theory of nonconvex surfaces. Alexandrov's work was both original and extremely influential. This book gave rise to studying surfaces "in the large," rejecting the limitations of smoothness, and reviving the style of Euclid. Progress in geometry in recent decades correlates with the resurrection of the synthetic methods of geometry and brings the ideas of Alexandrov once again into focus. This text is a classic that remains unsurpassed in its clarity and scope. 300 equations; 100 Illustrations, black and white