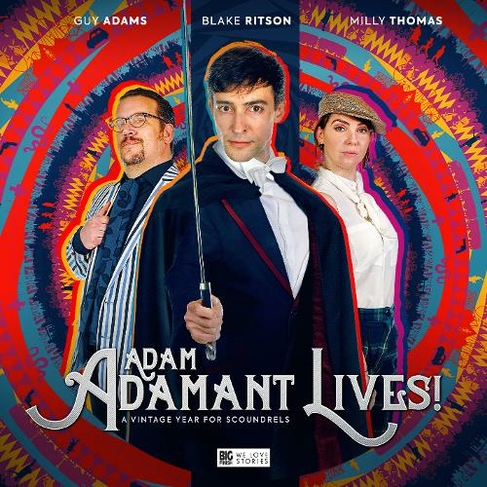 This is the first release in a new audio series based on the 1966-67 BBC TV cult classic series Adam Adamant Lives! Two of the people behind Doctor Who, Sydney Newman and Verity Lambert joined forces again to come up with the TV series, often described as a BBC version of The Avengers. 1.1 What is this Place? As Adam recovers in hospital, sinister underworld forces are at work. Perhaps Georgina Jones and her friends could do with the unexpected help of an anachronistic hero.1.2 Death Has a Thousand Faces. When a sugar-coated corpse is discovered, Adam Adamant can't resist looking into such a bizarre death. Journeying to Blackpool with Georgina Jones, he uncovers a suitably diabolical plot while discovering the hidden talents of Punch and Judy man William E Simms.1.3 Georgina Jones Dies! Adam Adamant, Georgina Jones and William E Simms make a fine crime-fighting trio. It seems as though their adventures will never end. Until Inspector Clemens arrives on the scene with some truly devastating news. CAST: Blake Ritson (Adam Adamant), Milly Thomas (Georgina Jones), Guy Adams (William E Simms), Leighton Pugh (Clemens), Daisy Ashford (Wilhelmina Stoker), Annabelle Dowler (Sandy), Glen McCready (Roddie Stoker), Amaka Okafor (Ren), Sheila Reid (Edna Pollack), Issy Van Randwyck (Margo Caine), Robert Whitelock (Corky). Other parts played by members of the cast.