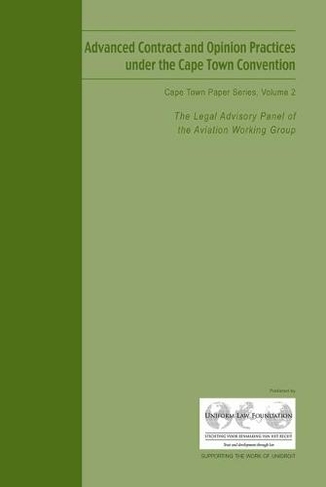 This book is the second in a series which addresses practical issues relating to contracting under the Cape Town Convention (the Convention). It has been produced by the Legal Advisory Panel of the Aviation Working Group, which has been the driving force behind the preparation and promotion of the Convention as applied to aircraft objects at the centre of activity on legal issues arising under the Convention. The aim of the group is to assist professionals working with the Convention in the context of transactions. This second book (the Green Book) builds upon the earlier Contract Practices under the Cape Town Convention ("the Purple Book"), which set out an initial set of practical guidelines to contracting under the Convention. The Purple Book was published prior to the entry into force of the Convention and since its publication major developments have occurred. The Convention and Protocol came into force on 1 March 2006, on which date the International Registry for aircraft objects commenced operations. The Registry system has been regularly upgraded and is governed by Regulations and Procedures now in their third edition. Already there have been nearly 100,000 registrations in the International Registry and much experience has been gained from the large number of transactions in which contracting parties and practitioners have been involved. The appearance of the second volume in the series, Advanced Contract and Opinion Practices under the Cape Town Convention ("the Green Book"), is therefore timely. Among other things it provides a practical guide to the registration system, with its elaborate mechanism of approvals and authorisations, advice on documentation and arrangements for closing, and annotated forms of legal opinion, both generic and specific. The Green Book benefits from two years of actual practice under Convention and also refers to the recently published revised edition of the Official Commentary by Professor Sir Roy Goode, an essential resource for anybody seeking to understand or enter into transactions governed wholly or partially by the Convention.

The Legal Advisory Panel of the Aviation Working Group on the Cape Town Convention.