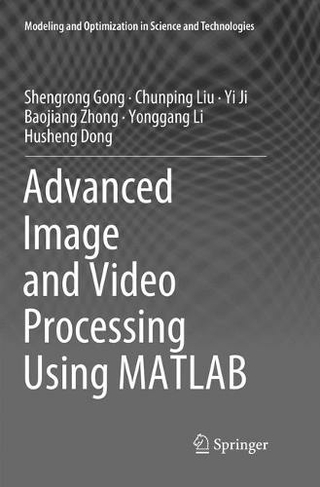 This book offers a comprehensive introduction to advanced methods for image and video analysis and processing. It covers deraining, dehazing, inpainting, fusion, watermarking and stitching. It describes techniques for face and lip recognition, facial expression recognition, lip reading in videos, moving object tracking, dynamic scene classification, among others. The book combines the latest machine learning methods with computer vision applications, covering topics such as event recognition based on deep learning,dynamic scene classification based on topic model, person re-identification based on metric learning and behavior analysis. It also offers a systematic introduction to image evaluation criteria showing how to use them in different experimental contexts. The book offers an example-based practical guide to researchers, professionals and graduate students dealing with advanced problems in image analysis and computer vision. 79 Illustrations, color; 102 Illustrations, black and white; XVIII, 590 p. 181 illus., 79 illus. in color.

Shengrong Gong received his M.S. degree from Harbin Institute of Technology in 1993, and his Ph.D degree from Beihang University in 2001. He is the dean of School of Computer Science and Engineering, Changshu Institute of Science and Technology, and also a professor and doctoral supervisor. His research interests are image and video processing, pattern recognition, and computer vision. Chunping Liu received her Ph.D degree in pattern recognition and artificial intelligence from Nanjing University of Science & Technology in 2002. She is now a professor of School of Computer Science & Technology, Soochow University. Her research interests include computer vision, image analysis and recognition, in particular in the domains of visual saliency detection, object detection and recognition and scene understanding. Yi Ji received her M.S. Degree from National University of Singapore, Singapore and Ph.D. degree from INSA de Lyon, France. She is now an associate professor in School of Computer Science & Technology of Soochow University. Her research areas are 3D action recognition and complex scene understanding. Baojiang Zhong received the B.S. degree in mathematics from Nanjing Normal University, China in 1995, the M.S. degree in mathematics, and the Ph.D. degree in mechanical and electrical engineering from Nanjing University of Aeronautics and Astronautics (NUAA), China in 1998 and 2006, respectively. From 1998 to 2009, he was on the faculty of the Department of Mathematics of NUAA and reached the rank of Associate Professor. During 2007 to 2008, he was also a Research Scientist with the Temasek Laboratories, Nanyang Technological University, Singapore. In 2009, he joined the School of Computer Science and Technology, Soochow University, China, where he is currently a Full Professor. His research interests include computer vision, image processing, and numerical linear algebra. Yonggang Li received the M.S. degree from Xi'an Polytechnic University in 2005. He is currently pursuing the Ph.D degree in School of Computer Science and Technology, Soochow University. He is a lecturer of College of mathematics physics and information engineering, Jiaxing University. His research interests include computer vision, image and video processing, and pattern recognition. Husheng Dong received his M.S. degree from School of Computer Science & Technology, Soochow University in 2008, and he is pursuing the Ph.D degree currently. He is also a lecturer of Suzhou Institute of Trade & Commerce. His research interest includes computer vision, image and video processing, and machine learning.