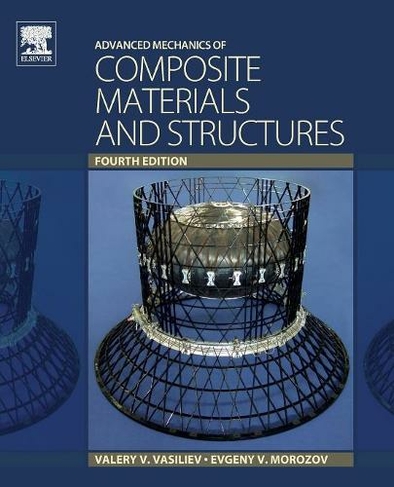 Also available on eBook for £148.91. Click here to purchase from Rakuten Kobo

Advanced Mechanics of Composite Materials and Structures analyzes contemporary theoretical models at the micro- and macro levels of material structure. Its coverage of practical methods and approaches, experimental results, and optimization of composite material properties and structural component performance can be put to practical use by researchers and engineers. The fourth edition has been updated to reflect new manufacturing processes (such as 3D printing of two matrix composite structural elements) and new theories developed by the authors. The authors have expanded the content of advanced topic areas with new chapters on axisymmetric deformation of composite shells of revolution, composite pressure vessels, and anisogrid composite lattice structures. This revision includes enhanced sections on optimal design of laminated plates and additional examples of the finite element modelling of composite structures and numerical methods. Advanced Mechanics of Composite Materials and Structures, Fourth edition is unique in that it addresses a wide range of advanced problems in the mechanics of composite materials, such as the physical statistical aspects of fiber strength, stress diffusion in composites with damaged fibers, nonlinear elasticity, and composite pressure vessels to name a few. It also provides the foundation for traditional basic composite material mechanics, making it one of the most comprehensive references on this topic.

V.V. Vasiliev became a Titled Professor in 1973, was elected as a corresponding member of the USSR Academy of Sciences in 1984 and as a full member of Russian Academy of Sciences in 2016. He worked as an engineer of the Central Aero-Hydrodynamic Institute (61-62), senior researcher and associate professor of Moscow Aviation Institute (63-72), professor of Moscow Institute of Civil Aviation Engineering (72-73) and the Head of the Department of Aerospace Composite Structures of the Moscow State University of Aviation Technology (74-98). Since 1971, he has been the General Scientific Consultant of Central Research Institute of Special Machinery and since 2012 - the chief science researcher of the Institute for Problems in Mechanics of the Russian Academy Sciences. In 1984 and 2001 he was awarded with the USSR State Prize and RF Government Prize for application of composite materials in aerospace structures. Professor Vasiliev is an author or co-author of 17 monographs, textbooks, handbooks, and design guides in mechanics of thin-walled and composite structures. Professor Morozov has more than 35 years practical and research experience in the field of composite technology. He co-authored five books and published more than 200 papers on mechanics and analysis of composite materials and structures. He became a Full Professor of Aerospace Composite Structures, Moscow State University of Aviation Technology in 1991. In 1995, he joined the School of Mechanical Engineering, University of Natal, South Africa as the Professor of Manufacturing Systems. In 2007, he joined University of New South Wales (UNSW), Canberra, Australia as the Professor of Mechanical and Aerospace Engineering.He is a Member of the Editorial Boards of Composite Structures (International Journal), Elsevier; the International Journal of Engineered Fibers and Fabrics (JEFF), INDA, TAPPI, The Fiber Society; Member of the Editorial Advisory Board of the International Journal "Curved and Layered Structures", De Gruyter.