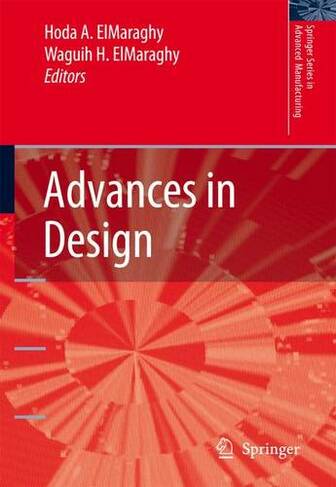 By Hoda A. ElMaraghy (Contributor), Waguih H. ElMaraghy (Contributor)
Hardback
https://www.whsmith.co.uk/products/advances-in-design-2006-ed/hoda-a-elmaraghy/waguih-h-elmaraghy/hardback/9781846280047-01-000.html N/A
GBP
Availability
Currently unavailable. We don't know when or if this item will be back in stock
Free Saver Delivery on orders over £20
Details
FREE SHIPPING over £20 for Saver Delivery
Share

Advances in Design examines recent advances and innovations in product design paradigms, methods, tools and applications. It presents fifty-two selected papers which were presented at the 14th CIRP International Design Seminar held in May 2004. This book will be bought by postgraduate and senior undergraduate students studying product design. It will also be of interest to researchers and practitioners working in the field of product design. 31 Tables, black and white; 264 Illustrations, black and white; XXII, 576 p. 264 illus.

Dr. Hoda ElMaraghy became the first woman Dean of Engineering in Canada in 1994 at the University of Windsor. Prior to that she was a Professor of Mechanical Engineering at McMaster University in Hamilton, Ontario where she was the founding Director of the Center for Flexible Manufacturing Research and Development. She has been named Canada Research Chair in Manufacturing Systems - in recognition of her leadership and distinguished contributions to the modern manufacturing systems theories and practice that have been implemented by numerous companies to advantage. She is author and co-author of 312 refereed journal and conference publications, contributor to 14 books, and author of 3 theses, 83 unpublished industrial reports and internal research reports. Dr. ElMaraghy is a Fellow of the Canadian Society of Mechanical Engineers (CSME) and the American Society of Manufacturing Engineers (SME). She received the Association of Professional Engineers of Ontario's "Engineering Medal" for Research and Development and was named Hamilton's 1990 Woman of the Year in the Workplace Category. Dr. Waguih ElMaraghy is a Professor of Engineering and Director of the Intelligent Manufacturing Systems (IMS) Centre in the Department of Industrial and Manufacturing Systems Engineering Department at the University of Windsor. Before joining Windsor, Dr. ElMaraghy was Professor and founding Director of the DA&MRL (Design Automation & Manufacturing Research) Centre of research excellence at the University of Western Ontario. He is an international expert in engineering design, manufacturing and industrial productivity and competitiveness. He has a number of Patents and has consulted for Industry, including on UNDP TOKTEN projects. Dr. ElMaraghy has carried out several national and international collaborative research projects, and is the author of over 150 publications, and over 100 Industry reports, and is currently supervising about twelve Masters and Ph.D. students. Dr. ElMaraghy has also contributed to a number of engineering design and manufacturing books, including being co-editor in 1989 of "Design Theory and Methodology", Proc. of the ASME First International Design Theory and Methodology Conference (DTM'89), (ASME Book no.: H00507, ISBN: 0-7918-0361-9). Dr. ElMaraghy is a registered Professional Engineer in the Province of Ontario (PEO). He is a senior member of the Society of Manufacturing Engineers (SME), a Fellow of the Canadian Society for Mechanical Engineering (CSME), and is a Fellow of the American Society of Mechanical Engineers (ASME), and the CIRP (International Institute for Production Engineering Research).