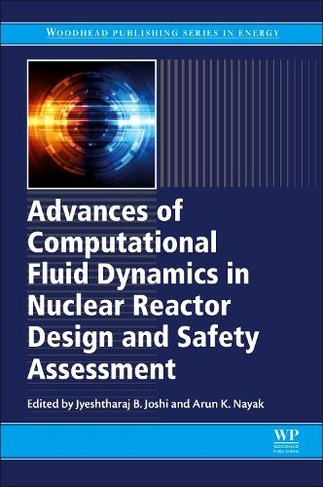 Also available on eBook for £254.99. Click here to purchase from Rakuten Kobo

Advances of Computational Fluid Dynamics in Nuclear Reactor Design and Safety Assessment presents the latest computational fluid dynamic technologies. It includes an evaluation of safety systems for reactors using CFD and their design, the modeling of Severe Accident Phenomena Using CFD, Model Development for Two-phase Flows, and Applications for Sodium and Molten Salt Reactor Designs. Editors Joshi and Nayak have an invaluable wealth of experience that enables them to comment on the development of CFD models, the technologies currently in practice, and the future of CFD in nuclear reactors. Readers will find a thematic discussion on each aspect of CFD applications for the design and safety assessment of Gen II to Gen IV reactor concepts that will help them develop cost reduction strategies for nuclear power plants.

Jyeshtharaj Bhalchandra Joshi is an Indian chemical engineer, nuclear scientist, consultant and teacher, widely known for his innovations in nuclear reactor designs and generally regarded as a respected teacher. He is the DAE-Homi Bhabha Chair Professor, Homi Bhabha National Institute, Mumbai, J. C. Bose Fellow of the Institute of Chemical Technology, Mumbai and is the recipient of Shantiswarup Bhatnagar Prize for Engineering Sciences and many other awards and recognitions. He received the third highest civilian honour, the Padma Bhushan, in 2014, from the President of India, for his services to the field of chemical engineering and nuclear science. He is widely published in many journals including the International Journal of Heat and Mass Transfer, Progress in Nuclear Energy, Chemical Engineering Science and Nuclear Engineering and Design Dr. Nayak received his PhD from TITech, Japan in 2000 in Nuclear Engineering, and his field of Specialization is Nuclear Reactor Thermalhydraulics and Safety. He has received multiple awards, prizes and honorary degrees throughout his career and is a life member of the Indian Nuclear Society and Indian Society of Heat and Mass Transfer. He has published over 73 peer reviewed articles and 140 conference proceedings.