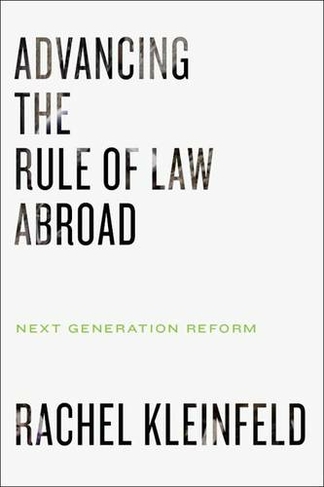 Advancing the Rule of Law Abroad: Next Generation Reform

In the modern era, political leaders and scholars have declared the rule of law to be essential to democracy, a necessity for economic growth, and a crucial tool in the fight for security at home and stability abroad. The United States has spent billions attempting to catalyse rule-of-law improvements within other countries. Yet despite the importance of the goal to core foreign policy needs, and the hard work of hundreds of practitioners on the ground, the track record of successful rule-of-law promotion has been paltry. In Advancing the Rule of Law Abroad , Rachel Kleinfeld describes the history and current state of reform efforts and the growing movement of second-generation reformers who view the rule of law not as a collection of institutions and laws that can be built by outsiders, but as a relationship between the state and society that must be shaped by those inside the country for lasting change. Based on research in countries from Indonesia to Albania, Kleinfeld makes a compelling case for new methods of reform that can have greater chances of success. This book offers a comprehensive overview of this growing area of policy action where diplomacy and aid meet the domestic policies of other states. Its insights into the practical methods and moral complexities of supporting reform within other countries will be useful to practitioners and students alike.

Rachel Kleinfeld is a non-resident associate of the Carnegie Endowment for International Peace, and the founding CEO of the Truman National Security Project.