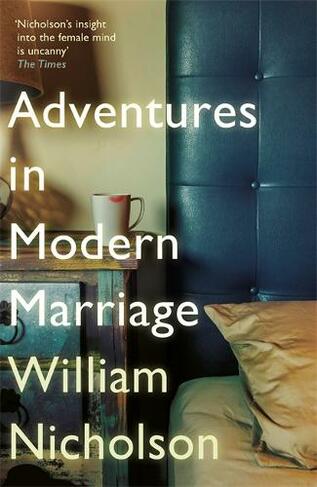 With pace, wit and a beady eye, Adventures in Modern Marriage revisits the characters from Nicholson's highly acclaimed The Secret Intensity of Everyday Life. But now the children are grown up, and the adults are older, though not always wiser. Here is a big-hearted novel about life and love in the bestselling vein of Colm Toibin and Nick Hornby 'So incredibly accurate and true. Utterly captures the sense of quiet desperation of ordinary lives ... and the ways in which life turns on a sixpence' Kate Mosse on The Secret Intensity of Everyday Life Focusing on Henry and Laura Broad and their daughter Carrie, this is a minute - but in true Nicholson style, extraordinarily empathetic - dissection of relationships and what keeps them going. It is an acute and compassionate look at male mid-life crises, female sexual desire, death and the fear of it, children and the trouble with them - all the things we battle with every day.

William Nicholson grew up in Sussex and was educated at Downside School and Christ's College, Cambridge. His plays for television include Shadowlands and Life Story, both of which won the BAFTA Best Television Drama award of their year. His first play, an adaptation of Shadowlands for stage, was Evening Standard's Best Play of 1990. He was co-writer on the film Gladiator, and his film writing credits include Elizabeth: The Golden Age, Les Miserables and Mandela: Long Walk to Freedom. He is married with three children and lives in Sussex. Visit his website at www.williamnicholson.co.uk