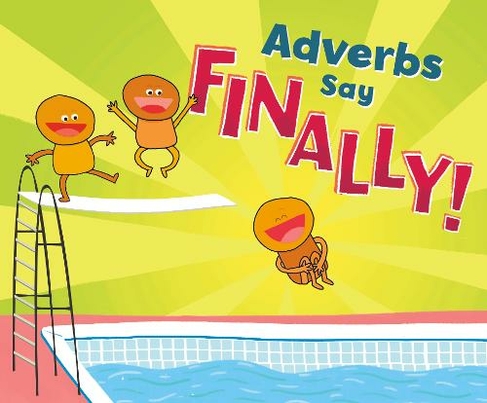 Whether diving from a very tall platform or crossing the finish line after a really gruelling bike race, the adverbs have the perfect word: finally! Honestly, isn't it time for a quirky parts-of-speech adventure that subtly teaches grammar basics while readers are busy cheering loudly and giggling often?

Maira Chiodi is an Illustrator and Surface Pattern Designer with a graphic design background. Her work already appeared in magazines, books, games, and wall decals, among other products. Her style is joyful and colorful, with a hint of humor that pleases grown-ups and children alike. She's inspired by nature, animation and the culture from her home country, Brazil. Her imaginary always produces funny weird beings, resulting in a magical and playful universe, where the spectator is immersed in childhood world. Michael Dahl is the prolific author of the bestselling Goodnight, Baseball picture book and more than 200 other books for children and young adults. He has won the AEP Distinguished Achievement Award three times for his nonfiction, a Teacher's Choice award from Learning magazine, and a Seal of Excellence from the Creative Child Awards. And he has won awards for his board books for the earliest learners, Duck Goes Potty and Bear Says "Thank You!" Dahl has written and edited numerous graphic novels for younger readers, authored the Library of Doom adventure series, the Dragonblood books, Trollhunters, and the Hocus Pocus Hotel mystery/comedy series. Dahl has spoken at schools, libraries, and conferences across the US and the UK, including ALA, AASL, IRA, and Renaissance Learning. He currently lives in Minneapolis, Minnesota in a haunted house.