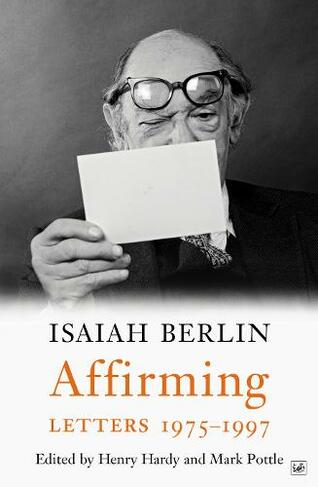 'IB was one of the great affirmers of our time.' John Banville, New York Review of Books The title of this final volume of Isaiah Berlin's letters is echoed by John Banville's verdict in his review of its predecessor, Building: Letters 1960-75, which saw Berlin publish some of his most important work, and create, in Oxford's Wolfson College, an institutional and architectural legacy. In the period covered by this new volume (1975-97) he consolidates his intellectual legacy with a series of essay collections. These generate many requests for clarification from his readers, and stimulate him to reaffirm and sometimes refine his ideas, throwing substantive new light on his thought as he grapples with human issues of enduring importance. Berlin's comments on world affairs, especially the continuing conflict between Israel and the Palestinians, and the collapse of Communism, are characteristically acute. This is also the era of the Northern Ireland Troubles, the Iranian revolution, the rise of Solidarity in Poland, the Chernobyl nuclear disaster, the fall of the Berlin Wall, Ayatollah Khomeini's fatwa against Salman Rushdie, the spread of Islamic fundamentalism, and wars in the Falkland Islands, the Persian Gulf and the Balkans. Berlin scrutinises the leading politicians of the day, including Reagan, Thatcher and Gorbachev, and draws illuminating sketches of public figures, notably contrasting the personas of Alexander Solzhenitsyn and Andrey Sakharov. He declines a peerage, is awarded the Agnelli Prize for ethics, campaigns against philistine architecture in London and Jerusalem, helps run the National Gallery and Covent Garden, and talks at length to his biographer. He reflects on the ideas for which he is famous - especially liberty and pluralism - and there is a generous leavening of the conversational brilliance for which he is also renowned, as he corresponds with friends about politics, the academic world, music and musicians, art and artists, and writers and their work, always displaying a Shakespearean fascination with the variety of humankind. Affirming is the crowning achievement both of Berlin's epistolary life and of the widely acclaimed edition of his letters whose first volume appeared in 2004.

Isaiah Berlin was born in Riga, now capital of Latvia, in 1909. When he was six, his family moved to Russia, and in Petrograd in 1917 Berlin witnessed both Revolutions - Social Democratic and Bolshevik. In 1921 he and his parents emigrated to England, where he was educated at St Paul's School, London, and Corpus Christi College, Oxford. Apart from his war service in New York, Washington, Moscow and Leningrad, he remained at Oxford thereafter - as a Fellow of All Souls, then of New College, as Chichele Professor of Social and Political Theory, and as founding President of Wolfson College. He also held the Presidency of the British Academy. His published work includes Karl Marx, Russian Thinkers, Concepts and Categories, Against the Current, Personal Impressions, The Sense of Reality, The Proper Study of Mankind, The Roots of Romanticism, The Power of Ideas, Three Critics of the Enlightenment, Freedom and Its Betrayal, Liberty, The Soviet Mind and Political Ideas in the Romantic Age. As an exponent of the history of ideas he was awarded the Erasmus, Lippincott and Agnelli Prizes; he also received the Jerusalem Prize for his lifelong defence of civil liberties. He died in 1997.Henry Hardy, a Fellow of Wolfson College, Oxford, is one of Isaiah Berlin's Literary Trustees. he has (co-)edited many other books by Berlin -- including this volume's three predecessors, Flourishing, Enlightening and Building -- and other authors, and is also the editor of The Book of Isaiah: Personal Impressions of Isaiah Berlin (2009). Mark Pottle is also a Fellow of Wolfson. He has (co-)edited the diaries and letters of Violet Bonham Carter, has collaborated in publishing a number of original First World War documents, and was Research Associate, Oxford Dictionary of National Biography, 2000-2. He co-edited the preceding volume of these letters, Building.