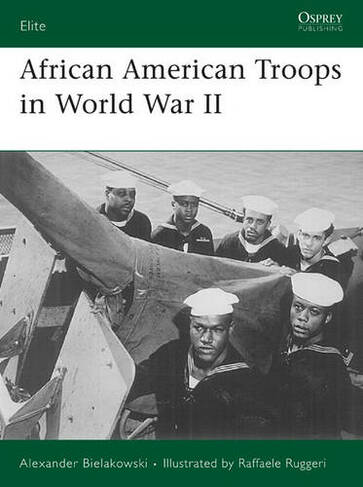 Although African Americans had to strive against prejudice for every chance to show what they could achieve, in fact the wartime US Army conceded opportunities for leadership unparalleled in American civil society at that date and tens of thousands of African Americans contributed to the war effort. Fully illustrated with poignant photographs and especially commissioned artwork, this book will depict the variety of key roles that African Americans played from fighter pilots to tank crews to grunts on the ground in every combat theatre from Europe to the Pacific. "Elite 158 African American Troops in World War II" is a concise history of the service records and combat experience of the African American troops who rose above discrimination to fight for the Allied cause and paved the way for integrated armed forces. Illustrations (some col.)

Alexander M. Bielakowski completed his Ph.D. in US military history at Kansas State University. He has written several articles on various aspects of military history, with a special interest in horse cavalry during the 20th Century. In 2000 he attended the West Point Summer Seminar in Military History at the United States Military Academy, and served as a historical consultant and interviewee for the History Channel documentary Animals in Action: Horses (2002). Dr. Bielakowski is an Associate Professor of Military History at the U.S. Army Command and General Staff College, Fort Leavenworth, Kansas. The author lives in Leavenworth, KS.