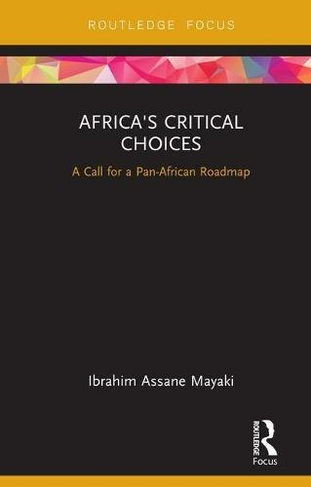 Also available on eBook for £12.83. Click here to purchase from Rakuten Kobo

This volume examines contemporary Africa, a vast continent which, while entering the era of globalization, is also confronted by a number of issues, including the environment and climate change, demographics, trade issues, internal and external migration, education, economic Issues, governance, and the influence of other countries. Written by former Prime Minister of Niger and current Chief Executive Officer of the Secretariat of the New Partnership for Africa's Development (NEPAD), Dr Ibrahim Assane Mayaki, this book offers an overview of Africa, and looks to the next generation of leaders in the continent, aiming to offer a manifesto for future change.

Dr Ibrahim Assane Mayaki is the Chief Executive Officer of the Secretariat of the New Partnership for Africa's Development (NEPAD). Born in Niger in 1951, he obtained a Master's Degree from the National School of Public Administration (Enap), Quebec, Canada and a PhD in Administrative Sciences from University of Paris I, France. He first worked as professor of Public Administration and Management in Niger and Venezuela during the periods 1978-82 and 1985-87. From 2000 to 2004, Dr Mayaki was a guest Professor at the University of Paris XI, where he lectured on international relations and organizations; he also led research at the Research Centre on Europe and the Contemporary World within that University. His political career started in 1997, when, under the presidency of Ibrahim Bare Mainassara, he joined the cabinet of Niger as Minister in charge for African Integration and Co-operation, before holding the position of Foreign Minister. He was appointed Prime Minister of the country in November 1997. He remained in charge until January 2000. As Prime Minister of Niger, Ibrahim Assane Mayaki played a catalyst role in enhancing the social dialogue in the country. He initiated the creation of relevant technical committees in charge of the negotiations with social partners. He also created the Public Policy Analysis Circle (Cercle d'analyse des politiques publiques), a think tank focusing on health and education policy. He was appointed as NEPAD's Chief Executive Officer in January 2009.