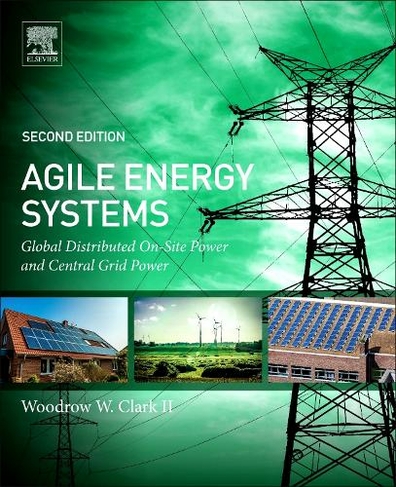 Also available on eBook for £144.83. Click here to purchase from Rakuten Kobo

Agile Energy Systems: Global Distributed On-Site and Central Grid Power, Second Edition, offers new solutions to the structure of electricity provision made possible by new energy technologies. The book begins by showing how five precipitating forces led to the deregulation debacle in California, including major technological changes and commercialization, regulatory needs mismatched to societal adjustments, inadequate and flawed economic models, a lack of vision, goals, and planning that lead to energy failures, and questionable finance and lack of economic development. The second half of the book examines the civic market paradigm for new economic models and how to plan for complexity using California as an example of how the problem of centralized power systems can be seen in the worst drought that California has ever seen.

Woodrow W. Clark, II, MA3 , PhD, is an internationally recognized scholar and expert in economics, renewable energy, sustainability, and sustainable communities. He was a contributing scientist to the United Nations Intergovernmental Panel on Climate Change (UNIPCC), which as an organization was awarded the Nobel Peace Prize in December 2007 along with Al Gore and his film "An Inconvenient Truth."Clark is an internationally recognized, respected expert, author, lecturer, public speaker and consultant on global and local solutions to climate change. His core focus is on economics for smart green communities. During the 1990s, he was Manager of Strategic Planning for Technology Transfer at Lawrence Livermore National Laboratory (LLNL) with University of California and U.S. Department of Energy. He was one of the contributing scientists for United Nations Intergovernmental Panel Climate Change (IPCC), awarded 2007 Nobel Peace Prize and Researcher for UN FCCC.From 2000-2003, Clark was Advisor, Renewable Energy, Emerging Technologies & Finance to California Governor Gray Davis. After the "recall" in 2004, Clark founded, and manages Clark Strategic Partners (CSP), a global environmental, policy and economics renewable energy consulting firm. Also 2015-2018, Clark taught courses at University of International Relations (UIR) in Beijing and lectured on "Environment Economics" Cheung Kong Graduate School of Business (April 2017). He was appointed (July 2016) to be a member of the Editorial Board for the Energy Review Journal (ERJ) in China. He was selected to be a member of the UN B20 Finance Task Force supported in 2016 by China. Clark teaches and lectures in the EU, especially Denmark and Italy.Clark published 12 books by the end of 2017 and over 70 peer-reviewed articles, which reflect his concern for global sustainable green communities. He has authored and edited books are The Next Economics (Springer, 2012) and Global Sustainable Communities Handbook (Elsevier, 2014). In addition, his latest coauthored books, with Grant Cooke, are The Green Industrial Revolution (Elsevier, 2014), Green Development Paradigm (in Mandarin, 2015) and Smart Green Cities (Routledge, February 2016). In 2017, Clark had three (3) books published, 2nd Ed of his first book: Agile Energy Systems: Global Systems (Elsevier Press) and 2nd Ed of Sustainable Communities Design Handbook (Elsevier Press 2017).Three more books are planned in 2018, including Climate Preservation (Elsevier Press); 2nd Ed of Qualitative Economics: The Next Economics (Springer Press) and Qualitative and Quantitative Economics (Q2E) for Palgrave Press, Clark created Clark Mass Media Company (CM2C) from his media company in San Francisco 3 decades ago that now distributes documentary and dramatic series on economic, political, climate, environmental and social issues. He earned three MA degrees from universities in Illinois and his Ph.D., University of California, Berkeley,and in 2017, his PhD thesis was updated into a book on Violence in Schools, Colleges and Universities,Contact: wwclark13@gmail.comLinkedIn: https://www.linkedin.com/in/woodrow-w-clark-ii-b6962214https://bschool.pepperdine.edu/about/people/faculty/woodrow-clark-economics-research-professor/