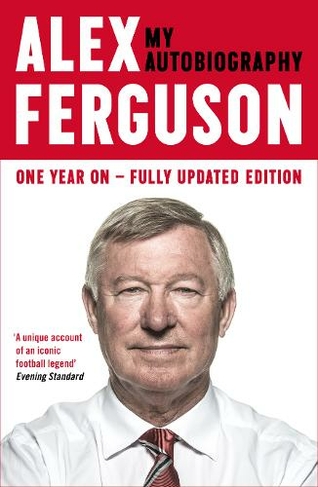 ALEX FERGUSON My Autobiography: The autobiography of the legendary Manchester United manager

By Alex Ferguson (Author)
Paperback
https://www.whsmith.co.uk/products/alex-ferguson-my-autobiography-the-autobiography-of-the-legendary-manchester-united-manager/alex-ferguson/paperback/9780340919408-12-000.html £10.65 rrp £12.99 Save £2.34 (18%)
GBP
Availability
In Stock
Free Delivery Available When You Spend £25 Or More
Details
Spend £25 On Eligible Products To Receive Free Standard Delivery To You Home Or Free Next Working Day Click And Collect To Store
Share

Sir Alex Ferguson's compelling story is always honest and revealing he reflects on his managerial career that embraced unprecedented European success for Aberdeen and 26 triumphant seasons with Manchester United. Sir Alex Ferguson's best-selling autobiography has now been updated to offer reflections on events at Manchester United since his retirement as well as his teachings at the Harvard Business School, a night at the Oscars and a boat tour round the Hebrides, where he passed unrecognised. The extra material adds fresh insights and detail on his final years as United's manager. Both the psychology of management and the detail of football strategy at the top level can be complex matters but no-one has explained them in a more interesting and accessible way for the general reader than Sir Alex does here. MY AUTOBIOGRAPHY is revealing, endlessly entertaining and above all inspirational. 4 x 8pp colour

Raised in the tough Govan district of Glasgow, where his father was a shipyard worker, Alex Ferguson started his own working life as an apprentice toolmaker. He went on to play for Queen's Park and five other professional football clubs including the idols of his boyhood, Rangers. Needless to say he was known as a hard and awkward opponent on the field as well as off it. Intelligent and quick-witted, Alex Ferguson followed his father's lead as a deeply committed socialist.