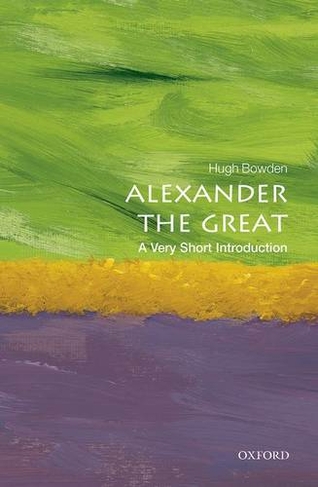 Alexander the Great became king of Macedon in 336 BC, when he was only 20 years old, and died at the age of 32, twelve years later. During his reign he conquered the Achaemenid Persian Empire, the largest empire that had ever existed, leading his army from Greece to Pakistan, and from the Libyan desert to the steppes of Central Asia. His meteoric career, as leader of an alliance of Greek cities, Pharaoh of Egypt, and King of Persia, had a profound effect on the world he moved through. Even in his lifetime his achievements became legendary and in the centuries that following his story was told and retold throughout Europe and the East. Greek became the language of power in the Eastern Mediterranean and much of the Near East, as powerful Macedonian dynasts carved up Alexander's empire into kingdoms of their own, underlaying the flourishing Hellenistic civilization that emerged after his death. But what do we really know about Alexander? In this Very Short Introduction, Hugh Bowden goes behind the usual historical accounts of Alexander's life and career. Instead, he focuses on the evidence from Alexander's own time - letters from officials in Afghanistan, Babylonian diaries, records from Egyptian temples - to try and understand how Alexander appeared to those who encountered him. In doing so he also demonstrates the profound influence the legends of his life have had on our historical understanding and the controversy they continue to generate worldwide. ABOUT THE SERIES: The Very Short Introductions series from Oxford University Press contains hundreds of titles in almost every subject area. These pocket-sized books are the perfect way to get ahead in a new subject quickly. Our expert authors combine facts, analysis, perspective, new ideas, and enthusiasm to make interesting and challenging topics highly readable. 8 black and white illustrations

Hugh Bowden is a senior lecturer in Ancient History at King's College London. An expert on Greek History and Ancient Religion, he has written several articles for academic journals and his books include Mystery Cults in the Ancient World (Thames & Hudson, 2010), Classical Athens & the Delphic Oracle: Divination and Democracy (CUP, 2005), Herakles and Hercules: Exploring a Graeco-Roman Divinity (co-edited with Louis Rawlings:Classical Press of Wales, 2005), and The Times Ancient Civilizations (as general editor: Harper Collins, 2002).