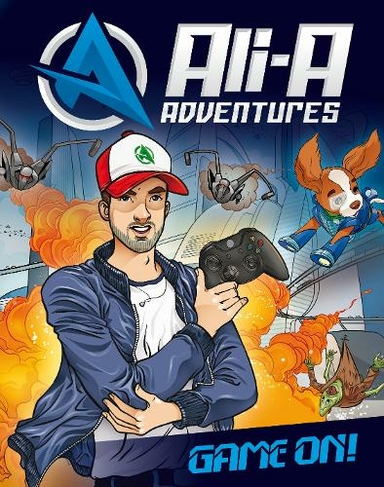 It's launch time for the hotly anticipated video game Alien Liberator 2, and who better to invite along than top gamer Ali-A? Ali is promised the biggest game launch ever - but what he doesn't count on is just how real the action is about to get! When a merciless band of aliens turns up to spoil the party, it's up to Ali to transform from gaming icon to real-life hero. Can he defeat the end-of-game boss and save the day? With a little help from his fans and a very special dog named Eevee, he's going to give it his best shot!

Ali-A (Author) With 3 billion YouTube views and 13 million subscribers across his two channels, Ali-A is one of the most popular faces in gaming. He holds two Guinness World Records for his Call of Duty content, and is also known for his Pokemon Go videos. In 2017, Ali debuts his brand new CBBC series, Ali-A's Superchargers. You can find him on his YouTube channels Ali-A and MoreAliA, and on Twitter at @OMGitsAliA.Cavan Scott (Author) Cavan Scott is a bestselling author and comic writer, whose long list of credits includes titles for Doctor Who, Skylanders, Penguins of Madagascar, Adventure Time and Angry Birds. His 2016 Star Wars novel Adventures in Wild Space: The Escape hit number one in both the UK Children's Book Chart and overall UK Book Chart.Aleksandar Sotirovski (Illustrator) Aleksandar Sotirovski is a Macedonian illustrator and comic artist with over twenty-five years of international experience. Publishers he has worked with include Oxford University Press, Macmillan, Image Comics and Disney, and he also worked on the Penguins of Madagascar comics for Dreamworks. He has worked on German and American video games, movie storyboards and over three hundred advertisements.