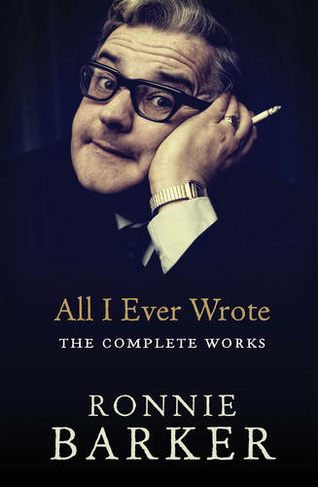 All I Ever Wrote: The Complete Works

Ronnie Barker has long been known as one of Britain's greatest comedy performers. But he was also responsible for writing much of the material he performed, often hiding the fact from the public by using a number of pen names. Showcasing the complete work of a true comic icon, All I Ever Wrote is a laugh-out-loud collection of sketches, monologues, songs, poems and scripts from every strand of Ronnie's long and brilliant career. With gems like 'Fork Handle's,' Three Classes' and 'Pismonouncers Unanimous', Ronnie's clever writing, double entendres and spoonerisms will bring a smile to your face, as you rediscover some of the twentieth century's finest comedy moments.

One of the greatest entertainers of his generation, Ronnie Barker was loved by millions for his roles in classic shows Open All Hours, Porridge and The Frost Report. Born in Bedford in 1929, Ronnie Barker began writing and performing in radio shows such as The Navy Lark. Barker met his comedy partner Ronnie Corbett while working on The Frost Report. Legend has it that they were signed up by the BBC after they impressed producers by filling in when a technical hitch occurred during the BAFTA awards. A gifted character actor as well as comedy writer, Barker went to star in classic sitcoms Open All Hours and Porridge.