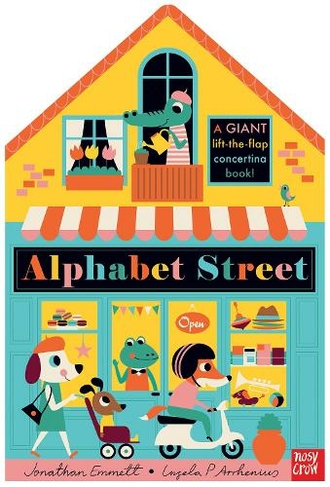 There's so much to discover in this ingenious little book! Read the story, lift the flaps, enjoy the funny rhyming text, learn the letters of the alphabet and, then, when you're finished, flip the book and have fun with the playscene on the reverse!

Jonathan Emmett (Author) Jonathan Emmett worked as an architect before becoming a children's author and novelty book designer, which may explain the inspiration behind Alphabet Street, a novelty book in the form of a street elevation.Jonathan is the author of over sixty books, including Bringing Down the Moon and The Princess and the Pig and his work has been translated into over thirty different languages. He likes building things and taking things apart, playing games and solving puzzles and letting his imagination run riot. You can find out more about Jonathan and his books at his website: scribblestreet.co.ukIngela P Arrhenius (Illustrator) Ingela P Arrhenius graduated from art school in the early 90s and has been working as an illustrator ever since. At first, she worked in advertising and magazines, but her focus over the past ten years has been on products and books.Ingela has created patterns for fabrics, wallpaper and stationery, as well as packaging and home accessories. She has also collaborated with several toy producers around the world and her love of retro style, typography and colour is reflected in all her work. Ingela lives in Stockholm with her husband (an author) and two sons.