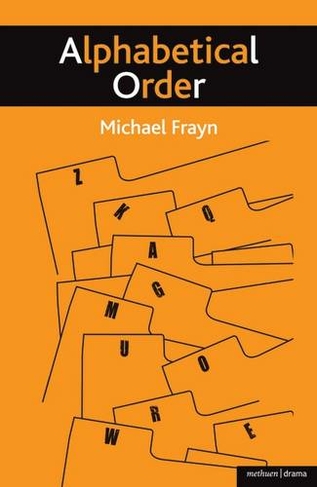 Winner of the Evening Standard Best Comedy Award after its long run at the Hampstead Theatre and on the West End in 1975, Alphabetical Order is set in the library of a provincial newspaper where battle is joined between the forces of order and chaos, between arid organisation in the person of the new library assistant, Leslie, and humane confusion in the person of Lucy, the much-loved resident librarian. Drawing on his experience as a journalist, Frayn draws his gallery of characters with the hilarious accuracy which can only come from first-hand experience. This edition features the author's revised version of the script presented at the Hampstead Theatre in April 2009.

Michael Frayn's work for the stage includes Alphabetical Order, Make and Break and Noises Off, all of which received Best Comedy of the Year awards, while Benefactors was named Best Play of the Year. His other works include Democracy (National Theatre and West End prior to Broadway) and Copenhagen (winner of numerous awards including the Evening Standard and Critics' Circle Best Play Awards 1998). He has translated Chekhov's four last plays and is also a novelist and recipient of the Whitbread Prize for Best Novel for Spies.