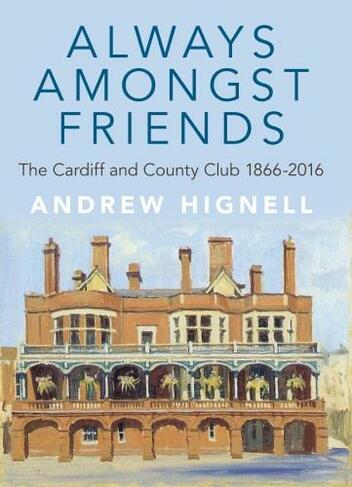 Always Amongst Friends: The Cardiff and County Club 1866-2016

Since its establishment in 1866 by prominent businessmen and the gentry of south Wales, the Cardiff and County Club has played a central role in the commercial, political and sporting life of Cardiff, as it developed from a burgeoning Victorian coal metropolis into the dynamic Welsh capital city of today. Led by local solicitor Henry Heard, the Club's founders had moved to Cardiff to work in the rapidly expanding town and, as the trade of the docks, businesses and shops all flourished, the men of influence, high social standing and growing wealth were looking for somewhere to gather, relax, dine and socialise in a convivial atmosphere with their friends and acquaintances. Initially located within, and then alongside, the Royal Hotel on St. Mary Street, the Club's growing popularity, and its close association with the Bute Estate, saw the members decide to construct the current Clubhouse on Westgate Street, which became one of the City's landmarks and still remains Wales' leading private members' club. Extensively researched and lavishly illustrated, Always Amongst Friends not only traces the fascinating 150-year history of the Club through a scholarly study of the social and economic history of Cardiff, but also celebrates the Cardiff and County Club's colourful characters, their mischievous humour and exudes the warmth and camaraderie so treasured by its members. 187

Dr. Andrew Hignell is the is the Heritage and Education Co-ordinator to Glamorgan County Cricket Club, and Curator of the CC4 Museum of Welsh Cricket, having previously taught Geography at Blundell's School in Devon, and Wells Cathedral School in Somerset. A prolific writer and broadcaster, Andrew is the editor of the Cricket in Wales series published by St. David's Press.