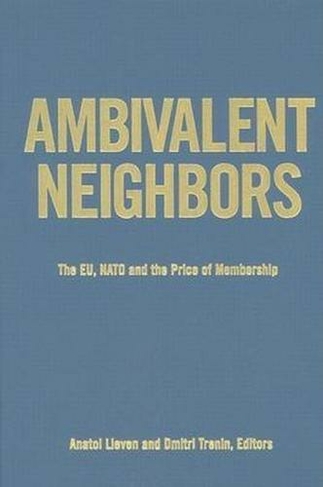 Ambivalent Neighbors: the Eu, Nato, and the Price of Membership

Almost fifteen years after the end of the Cold War, the process of creating a "Europe whole and free" is incomplete and likely to be so for the foreseeable future. In this volume, a group of highly distinguished contributors from both East and West examines the complicated and multi-faceted process of NATO and EU enlargement in the context of the changed global situation since the terrorist attacks of September 11, 2001. This book examines the enlargement processes not only from the perspective of the West and western institutions, but also from the point of view of the former communist countries. If an enlarged NATO and EU are to be stable and successful in the long run, they must take account of the wishes and interests of both their new, former-communist members and those European states that will not become members of either NATO or the EU in the foreseeable future. Contributors include Christopher Bobinski (Unia & Polska), Vladimir Baranovsky (Institute of the World Economy and International Relations), Heather Grabbe (Center for European Reform), Karl-Heinz Kamp (Konrad Adenauer Foundation), Charles King (Georgetown University), Alexander J. Motyl (Center for Global Change and Governance), Zaneta Ozolina (University of Latvia), Alexander Sergounin (Nizhny Novgorod Linguistic University), William Wallace (London School of Economics), and Leonid Zaiko (Strategy Center).