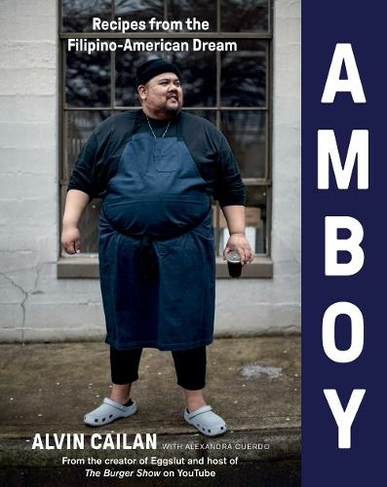 Amboy: Recipes from the Filipino-American Dream

By Alvin Cailan (Author)
Hardback
https://www.whsmith.co.uk/products/amboy-recipes-from-the-filipinoamerican-dream/alvin-cailan/hardback/9781328931733-12-000.html £21.59 rrp £26.99 Save £5.40 (20%)
GBP
Availability
In Stock
Free Delivery Available When You Spend £25 Or More
Details
Spend £25 On Products To Receive Free Standard Delivery To Your Home Or Free Next Working Day Click And Collect To Store
Share

Alvin Cailan has risen to become arguably the most high-profile chef in America's Filipino food movement. He took the food scene by storm when he opened the now-legendary Eggslut in Los Angeles, a foodie cult favourite specialising in affordable but sophisticated egg sandwiches. Alvin is now based in New York City, where his latest critically acclaimed restaurant is The Usual. Alvin also hosts the popular The Burger Show on First We Feast's YouTube channel, with many episodes exceeding 1 million views and guests such as Seth Rogen and Padma Lakshmi. Alvin's story of success, however, is an unlikely one. He emerged from his youth spent as part of an immigrant family in East LA feeling like he wasn't Filipino enough to be Filipino and not American enough to be an American, thus amboy, the term for a Filipino raised in America. He had to first overcome cultural traditions and family expectations to find his own path to success, and this unique cookbook tells that story through his recipes. 120 full colour photographs

ALVIN CAILAN, chef at The Usual in NYC, first grabbed nationwide attention with the wildly popular Eggslut in LA. Alvin is now focusing on his true passion: bolstering the modern Filipino food movement. He is the host of the popular The Burger Show on YouTube and lives in New York City.