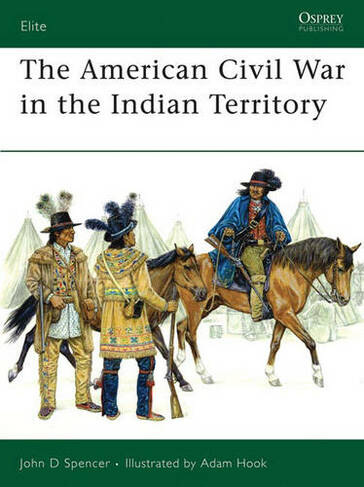 By John D. Spencer (Author), Adam Hook (Illustrator)
Paperback
https://www.whsmith.co.uk/products/american-civil-war-in-indian-territory-no-140/john-d-spencer/adam-hook/paperback/9781846030000-01-000.html £11.95 rrp £12.99 Save £1.04 (8%)
GBP
Availability
Currently unavailable. We don't know when or if this item will be back in stock
Free Saver Delivery on orders over £20
Details
FREE SHIPPING over £20 for Saver Delivery
Share

In 1861, Oklahoma (Indian Territory) was the recent home of the transported Five Civilized Tribes (Cherokee, Creek, Choctaw, Chickasaw, Seminole). When the Civil War broke out, both Union and Confederate state forces moved in and began fighting, both in the Indian Territory and across the borders of neighbouring states (mainly Kansas, but also Texas and Arkansas). Indians were recruited by both sides, and took the opportunity to pursue traditional hostilities which were supported by a variety of regular troops, guerrilla bands and outlaws. This book examines the warring sides in this fascinating and complex conflict. Illustrations (some col.)

John D. Spencer is a British military historian and is the Museums officer of the Duke of Wellington's Regt. He is fascinated by the American Civil War in Indian Territory and has been researching this subject for the past 25 years. With the help of the Oklahoma State Historical Society and Pea Ridge National Military Park he has sourced fascinating photographs and illustrations that bring the story to life.