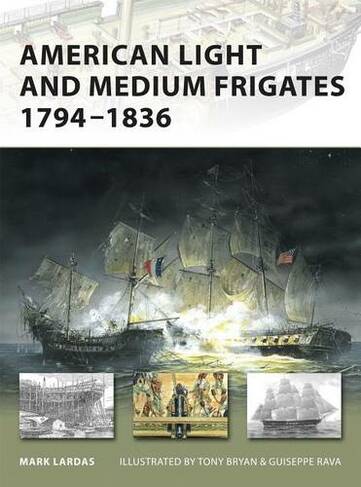 The 'Original Six' frigates were commissioned by the new-born US Navy at a staggering cost of $688,888.82. Designed to be light and fast, these warships enabled America to project its power across the globe.

Mark Lardas holds a degree in Naval Architecture and Marine Engineering. An amateur historian and a long-time ship modeler, Mark Lardas has written extensively about modeling as well as naval, maritime, and military history. Among his titles for Osprey are: NVG79 American Heavy Frigates. The author lives in League City, Texas.Tony Bryan is a freelance illustrator of many years' experience who lives and works in Dorset. He initially qualified in Engineering and worked for a number of years in Military Research and Development, and has a keen interest in military hardware - armor, small arms, aircraft and ships. Tony has produced many illustrations for partworks, magazines and books, including a number of titles in the New Vanguard series. Tony Bryan lives in Dorset, UK.