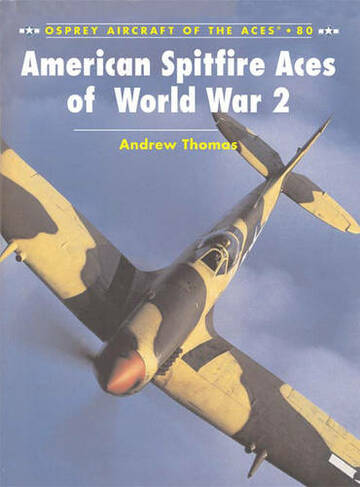 American Spitfire Aces of World War 2: (Aircraft of the Aces No. 80)

The first few American volunteers flew Spitfires with the RAF during the Battle of Britain. Many more joined their ranks, often posing as 'Canadians' eventually forming three 'Eagle' squadrons who earned a fierce fighting reputation. In 1942 the Eagle Squadrons were transferred to the Eighth Air Force and further fighter squadrons were formed which all flew Spitfires. In just two years of service with the USAAF, 22 pilots claimed five or more victories flying the Spitfire, whilst a further two dozen aces claimed part of their total flying them, a testament to their skill and success at the controls of this legendary warbird. Discover the experiences of a variety of American aces in their own words through first-hand accounts, interviews and combat reports, in a thrilling read that transports the reader from the Battle of Britain to the deserts of North Africa to Fortress Europe itself. Illustrations (some col.)

Andrew Thomas is one of Britain's most pre-eminent RAF researchers, having published numerous squadron histories. He is presently a serving officer in the RAF. The author lives in Sleaford, UK.