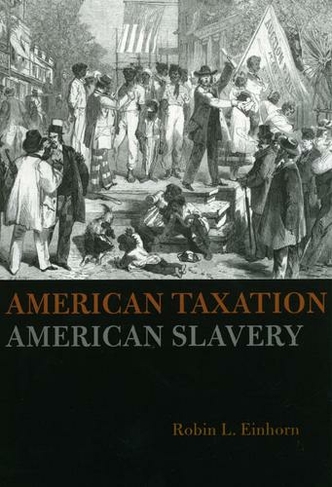 In "American Taxation, American Slavery", Robin Einhorn shows the deep, broad, and continuous influence of slavery on America's fear and loathing of taxes. From the earliest colonial times right up to the Civil War, slaveholding elites feared strong and democratic government as a threat to the institution of slavery. Einhorn reveals how the heated battles over taxation, the power to tax, and the distribution of tax burdens were rooted not in debates over personal liberty but rather in the rights of slaveholders to hold human beings as property. Along the way, she exposes the antidemocratic origins of the enduringly popular Jeffersonian rhetoric about weak government, showing that state governments were actually more democratic - and stronger - where most people were free.A strikingly original look at the role of slavery in the making of the United States, "American Taxation, American Slavery" will prove essential to anyone interested in the history of American government and politics. 6 line drawings, 2 maps, 10 tables