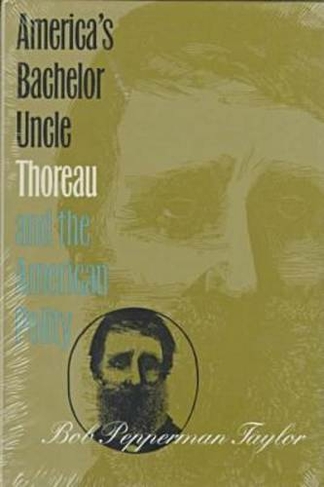 Emphatically revisionist, Bob Pepperman Taylor reveals a Thoreau most people never knew existed. Contrary to conventional views, Taylor argues that Thoreau was one of America's most powerful and least understood political thinkers, a man who promoted community and democratic values, while being ever vigilant against the evils of excessive or illegitimate authority. Still widely viewed as a remarkable nature writer but simplistic philosopher with no real understanding of society, Thoreau is resurrected here as a profound social critic with more on his mind than utopian daydreams. Rather than the aloof and very private individualist spurned by conservatives and championed by radicals and environmentalists, Taylor portrays Thoreau as a genuinely engaged political theorist concerned with the moral foundations of public life. Like a solicitous "bachelor uncle" (a self-referential phrase from his journals), Thoreau persistently prodded his fellow citizens to remember that they were responsible for independently evaluating the behavior of their government and political community. Taylor contends that, far from being confined to a few political essays ("Civil Disobedience," "Slavery in Massachusetts," and "A Plea for Captain John Brown"), Thoreau's political critique was a lifetime project that informed virtually all of his work. Taylor's persuasive study should send readers back to Walden, A Week on the Concord and Merrimack Rivers, and the 14-volume Journal, among many other writings, for a provocative new look at one of America's most influential writers.