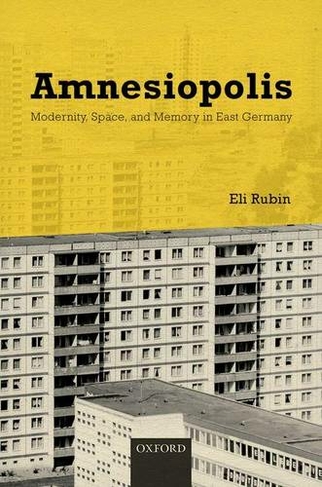 Amnesiopolis explores the construction of Marzahn, the largest prefabricated housing project in East Germany, built on the outskirts of East Berlin in the 1970s and 1980s, and touted by the regime as the future of socialism. It focuses particularly on the experience of East Germans who moved, often from crumbling slums left over as a legacy of the nineteenth century, into this radically new place - one defined by pure functionality and rationality - a material manifestation of the utopian promise of socialism. Eli Rubin employs methodologies from critical geography, urban history, architectural history, environmental history, and everyday life history to ask whether their experience was a radical break with their personal pasts and the German past. Amnesiopolis asks: can a dramatic change in spatial and material surroundings sever the links of memory that tie people to their old life narratives, and if so, does that help build a new socialist mentality in the minds of historical subjects? The answer is yes and no-as much as the East German state tried to create a completely new socialist settlement, divorced of any links to the pre-socialist past, the massive construction project uncovered the truth buried-literally-in the ground, which was that the urge to colonize the outskirts of Berlin was not new at all. Furthermore, the construction of a new city out of nothing, using repeating, identical buildings, created a panopticon-like effect, giving the Stasi the possibility of more complete surveillance than they previously had. colour-plate section

Eli Rubin is an Associate Professor of History at Western Michigan University. He received his PhD in 2004 from the University of Wisconsin-Madison, and in 2005 his dissertation was awarded the Fritz Stern Prize for the best dissertation in German History by the Friends of the German Historical Institute in Washington, DC. His first monograph, Synthetic Socialism: Plastics and Dictatorship in the German Democratic Republic was published in 2008. From2007-2009 he held an Alexander von Humboldt Stiftung Postdoctoral Fellowship in Germany as a fellow of the Zentrum fur Zeithistorische Forschung in Potsdam.