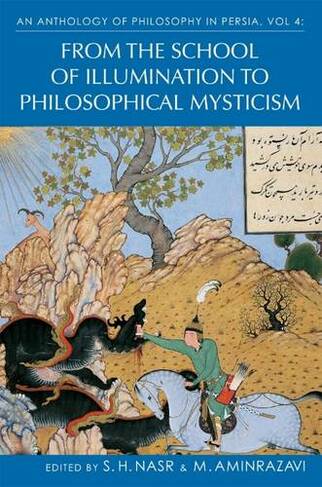 An Anthology of Philosophy in Persia, Vol. 4: From the School of Illumination to Philosophical Mysticism

The fourth volume of the Anthology of Philosophy in Persia deals with one of the richest and yet least known periods of philosophical life in Persia, the centuries between the seventh/thirteenth century, that saw the eclipse of the school of Khorosan, and the tenth/sixteenth century that coincided with the rise of the Safavids. The main schools dealt with in this volume are the Peripatetic (mashsha'i) School, the School of Illumination (ishraq) of Suhrawardi, and various forms of philosophical Sufism, especially the school of Ibn 'Arabi, that had its origins in the works of Ghazzali and 'Ayn al-Qudat Hamadani. This period was also notable for the philosopher-scientists such as Nasir al-Din Tusi and Qutb al-Din Shirazi.

Seyyed Hossein Nasr received his early education in Iran and completed his formal studies at the Massachusetts Institute of Technology and Harvard University. He is the author of over five hundred articles and fifty books. He has taught at a number of universities, both in the Middle East, including Tehran University, and in the United States, and he has lectured widely on Islamic philosophy. He is currently University Professor of Islamic Studies at The George Washington University. Mehdi Aminrazavi received his early education in Iran and completed his master's degree in Philosophy at the University of Washington and his doctorate in Philosophy of Religion at Temple University. He is the author and editor of numerous articles and books and is currently Professor of Philosophy and Religion at the University of Mary Washington and Director of the Middle Eastern Studies Program.