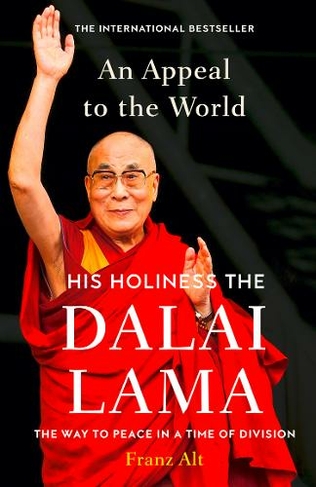 An Appeal to the World: The Way to Peace in a Time of Division

By Dalai Lama (Author), Franz Alt (Contributor)
Hardback
https://www.whsmith.co.uk/products/an-appeal-to-the-world-the-way-to-peace-in-a-time-of-division/hardback/9780008278427-12-000.html £8.19 rrp £9.99 Save £1.80 (18%)
GBP
Availability
In Stock
Free Delivery Available When You Spend £25 Or More
Details
Spend £25 On Products To Receive Free Standard Delivery To Your Home Or Free Next Working Day Click And Collect To Store
Share

In An Appeal to the World, His Holiness the 14th Dalai Lama of Tibet illuminates the way to peace in our time, arguing for a form of universal ethics that goes beyond religion - values we all share as humans that can help us create unity and peace to heal our world. THE INTERNATIONAL BESTSELLER `I see with ever greater clarity that our spiritual well-being depends not on religion, but on our innate human nature, our natural affinity for goodness, compassion and caring for others' In this urgent `appeal to the world', His Holiness the Dalai Lama addresses our time of division, calling on us to draw upon the innate goodness of our shared humanity to overcome the rancour, mistrust, and divisiveness that threaten world peace and sustainability. Working with trusted collaborator Franz Alt, the Dalai Lama calls on the better angels of our nature to tackle a wide range of contemporary issues, from war, violence and intolerance to climate change, global hunger and materialism. Applying the techniques and teachings of Tibetan Buddhism - from listening and contemplation to meditation and nonviolence - His Holiness provides a roadmap forward. Brief yet profound, An Appeal to the World is an inspiring message of love and optimism that can truly change the world.

His Holiness the 14th Dalai Lama, Tenzin Gyatso, is the spiritual leader of the Tibetan People and of Tibetan Buddhism. He was awarded the Nobel Peace Prize in 1989 and the U.S. Congressional Gold Medal in 2007. He has been a passionate advocate for a secular universal approach to cultivating fundamental human values. His most recent book is the New York Times bestseller The Book of Joy, co-authored with Desmond Tutu. He lives in exile in Dharamsala, India. Franz Alt is a television journalist and bestselling author. His books have been translated into twelve languages and have sold more than two million copies worldwide.