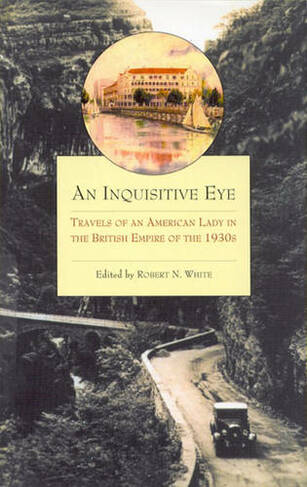 An Inquisitive Eye: Travels of an American Lady in the British Empire of the 1930s

When Sybil Hall Nowell set off from San Francisco one February morning in 1935 on a round-the-world trip with her husband Jack, the energetic American couple fell into the embrace of the British Empire with great gusto. As they traveled through Australia and New Zealand and then through Africa up to Britain they delighted in the formality, civility, and good manners that defined at least the surface of the British imperial experience. During their four-month voyage, Sybil Nowell studiously wrote letters home at every stop, describing this calm and orderly world. Sybil Nowell's letters, introduced and edited here by Robert N. White (her grandson) who has provided useful historical and political commentary, portray the easy complacency of Empire that came with power, privilege, and prestige. Illustrations, 1 map, ports.

Robert N. White is the author of A River in Spain: Discovering the Duero Valley in Old Castile (I.B.Tauris, 1998).