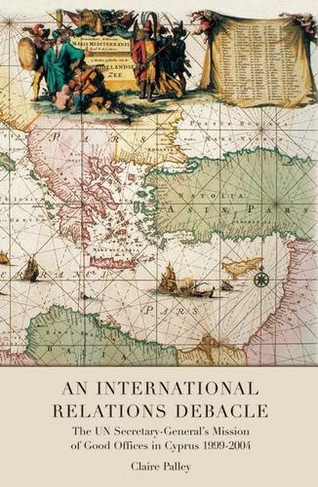 An International Relations Debacle: The UN Secretary-general's Mission of Good Offices in Cyprus 1999-2004

This book is a case study in international relations and contemporary history, as seen from the standpoint of a constitutional, international and human rights lawyer involved in 25 years of negotiations to agree on a federation reuniting the divided Island of Cyprus. Based for the most part on personal knowledge, the writer describes recent international attempts to settle the long-standing disputes over Cyprus and provides a warning to those who invoke UN "good offices" machinery of risks they run. In explaining the UN Secretariat's activities, the roles played by major Powers are emphasised, together with consequential local perceptions which ultimately led to failure of the international effort. Analysis of what went wrong in that effort's later phases indicates procedural and substantive approaches needed for any renewed negotiations to achieve success. Subsequent developments until the end of 2004, including the EU's agreement to open accession negotiations with Turkey and potential positive measures, are also outlined, as are the issues which all parties should now properly consider. Accompanying the text, which concentrates on the 2002-2004 period, is an extensive photographic record since 1954 of "the Cyprus problem" and of previous and recent attempts at negotiation. The illustrations, sometimes light-heartedly captioned, put events in context and illuminate the attitudes of significant actors in a manner no written text (other than one by a novelist) can do. The writer, both in text and photographs, frankly avows the prejudices and selectivity inevitable in any account of controversial and divisive events. But the resulting alternative narrative should facilitate a deeper understanding of the Cyprus situation than that currently afforded by the received picture, which has been presented by the UN Secretariat and certain major Powers. Such deeper understanding could assist in achieving a positive resolution of the conflict-ridden relationships in, around and about Cyprus. Illustrations (some col.), maps (some col.), ports. (some col.)

Claire Palley is former UK representative to the UN Sub-Commission on Prevention of Discrimination and Protection of Minorities (1988-1998) and former Constitutional Consultant to the President of Cyprus (1980-2004).