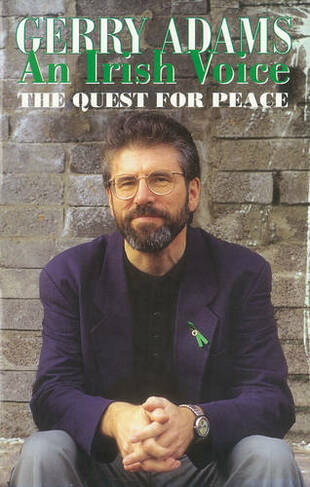 An Irish Voice: The Quest for Peace

By Gerry Adams (Author)
Paperback
https://www.whsmith.co.uk/products/an-irish-voice-the-quest-for-peace/gerry-adams/paperback/9781902011011-01-000.html £8.99
GBP
Availability
Currently unavailable. We don't know when or if this item will be back in stock
Free Saver Delivery on orders over £20
Details
FREE SHIPPING over £20 for Saver Delivery
Share

A revealing chronicle of events in the Irish peace process and into the private life of Gerry Adams. Consisting of selected articles from his regular column in the New York newspaper, The Irish Voice, these writings include talks with John Hume in 1993, through the IRA cessation, President Clinton's visit, the bombing at Canary Wharf, right up to the restoration of the IRA cessation. Gerry Adams gives an absorbing first-hand account.

President of Sinn Fein and TD for Louth, Gerry Adams has been a published writer since 1982. His books have won critical acclaim in many quarters and have been widely translated. His writings range from local history and reminiscence to politics and short stories, and they include the fullest and most authoritative exposition of modern Irish republicanism.Born in West Belfast in 1948 into a family with close ties to both the trade union and republican movements, Gerry Adams is the eldest of ten children. His mother was an articulate and gentle woman, his father a republican activist who had been jailed at the age of sixteen, and he was partly reared by his grandmother, who nurtured in him a love of reading.His childhood, despite its material poverty, he has described in glowing and humorous terms, recollecting golden hours spent playing on the slopes of the mountain behind his home and celebrating the intimate sense of community in the tightly packed streets of working-class West Belfast. But even before leaving school to work as a barman, he had become aware of the inequities and inequalities of life in the north of Ireland. Soon he was engaged in direct action on the issues of housing, unemployment and civil rights.For many years his voice was banned from radio and television by both the British and Irish governments, while commentators and politicians condemned him and all he stood for. But through those years his books made an important contribution to an understanding of the true circumstances of life and politics in the north of Ireland.James F. Clarity of the New York Times described him in the Irish Independent as "A good writer of fiction whose stories are not IRA agitprop but serious art."