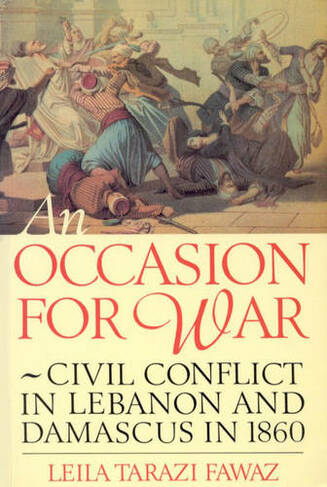 An Occasion for War: Civil Conflict in Lebanon and Damascus in 1860 (New edition)

This study tells the story of the 1860 civil wars which began in Mount Lebanon and spilled over into Damascus to become the most severe sectarian outbreak in the history of Ottoman Syria and Lebanon. The author's close analytical narrative of the dramatic events of this year is set against the background of broader themes of social, political and economic change during the 19th century and explores the interaction of local contexts with regional and international currents. Fawaz shows how social conflict, including apparently "ethnic" civil wars, cannot be explained without analyzing the forces which upset the finely tuned balance between central state power and regional autonomy, and the communal balance of social and political institutions within regions. Fawaz is keenly sensitive to the local texture of social relations and her writing reveals the many facets of the civil wars, each made up of distinct grievances and conflicts. In her conclusion, the author considers the parallels between 1860 and Lebanon today. With its insight into the formation of sectarian identities and conflict in the modern Middle East, this book should be useful to all students of the region. illustrations, maps, bibliography, index