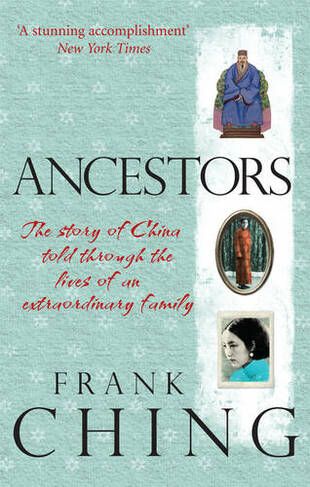 Ancestors: The story of China told through the lives of an extraordinary family

By Frank Ching (Author)
Paperback
https://www.whsmith.co.uk/products/ancestors-the-story-of-china-told-through-the-lives-of-an-extraordinary-family/frank-ching/paperback/9781846041778-01-000.html £13.79 rrp £14.99 Save £1.20 (8%)
GBP
Availability
Currently unavailable. We don't know when or if this item will be back in stock
Share

Frank Ching brings to life 900 years of Chinese history through his own fascinating family tree. Beginning with his search for the grave of his first recorded ancestor, the 11th century poet Qin Guan, and ending with a moving account of his relationship with his father, a victim of China's historic upheaval, Frank Ching introduces a colourful cast of characters. His unbroken family line includes - among many others - a lovelorn concubine, a traitor, a military hero, an imperial ghost-writer, a minister of punishments and a woman noted for her skills in both verse and martial arts. There is scarcely an aspect of Chinese life, from shamanism to violent rebellion, that Ching doesn't touch upon in this fascinating work. Through his vivid and personal portraits of his ancestors the history of China itself unfolds: from the days of the ancient empire to its radical transformation today. 8 page b&w plate section

Frank Ching was educated at Columbia University in New York, then worked as a journalist for the New York Times before setting up the Wall Street Journal's first bureau in Beijing in 1979. Later, after nine years on the Far Eastern Economic Review he moved to the South China Morning Post as Senior Columnist. For twelve years, he hosted the weekly current affairs tv programme 'Newsline' on the World channel of Asia Television. He lives in Hong Kong.