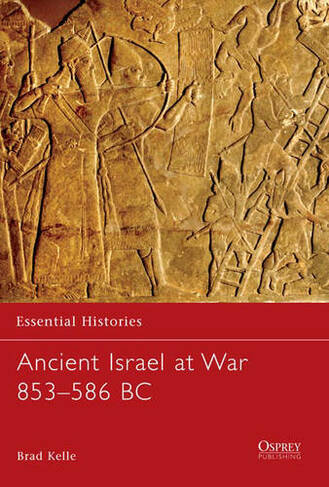 Complex and unstable, in 922 BC, the kingdom of Ancient Israel was divided into Judah, in the South, and Israel, in the North. For the next 200 years, there was almost constant warring between these kingdoms and their neighbors. These bitter feuds eventually led to the collapse of Israel, leaving Judah as a surviving nation until the emergence of the Babylonian Empire, the destruction of Jerusalem in 586 BC, and the exile of the Jewish people. Using ancient Jewish, Biblical, and other contemporary sources, this title examines the politics, fighting, and consequences of Israel's battles during this period. Focusing on the turbulent relationship between the kingdoms of Israel and Judah, this book explains Israel's complex, often bloody, foreign policy, and provides a definitive history of these ancient conflicts. Illustrations (some col.)

Dr. Brad Kelle is Assistant Professor of Biblical Literature at Point Loma Nazarene University. He specializes in Hebrew, as well as Old and New Testament history and religion. Over the last two years he has chaired the Society of Biblical Literature's consultation conferences on 'Warfare in Ancient Israel.' He has also written and published many articles and books on Ancient Israel and the Hebrew Bible. He lives in San Diego.Professor Robert O'Neill, AO D.Phil. (Oxon), Hon D. Litt. (ANU), FASSA, FR Hist S, is the Series Editor of the Essential Histories. His wealth of knowledge and expertise shapes the series content and provides up-to-the-minute research and theory. He has held a number of eminent positions in history circles, including the Chichele Professorship of the History of War at All Souls College, University of Oxford, and the Chairmanship of the Board of the Imperial War Museum and the Council of the International Institute for Strategic Studies, London. He is the author of many books including works on the German Army and the Nazi Party, and the Korean and Vietnam wars. Now based in Australia he is the Chairman of the Council of the Australian Strategic Policy Institute. The author lives in San Diego, USA.