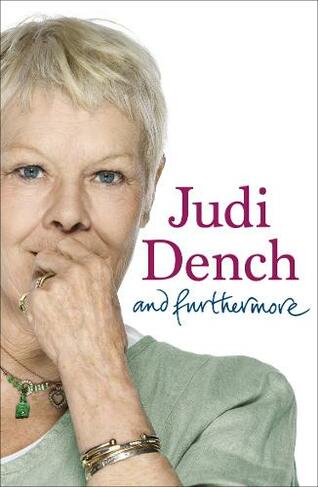 By Judi Dench (Author)
Paperback
https://www.whsmith.co.uk/products/and-furthermore/judi-dench/paperback/9781780224404-12-000.html £10.65 rrp £12.99 Save £2.34 (18%)
GBP
Availability
In Stock
Free Delivery Available When You Spend £25 Or More
Details
Spend £25 on eligible products to receive free standard delivery to home or free next working day click and collect to store
Share

The SUNDAY TIMES bestselling memoir of Britain's best-loved actress, Dame Judi Dench. 'She's been one of our favourite actresses for five decades, and now ...AND FURTHERMORE gives an insight into her sensational career and how she coped after losing her husband to cancer in 2001' GOOD HOUSEKEEPING 'Vivid and engaging' WOMAN & HOME 'The most popular as well as the greatest actress of her age' THE LADY From the moment Judi Dench appeared as a teenager in the York Mystery Plays it was clear that acting would be her career. Trained at London's Central School of Speech and Drama it was her performance in her twenties as Juliet in Franco Zeffirelli's memorable Old Vic production that turned her into a star. In the theatre since she has played every classic role from Titania to Cleopatra. She first became a household name via television, thanks initially to a sitcom, A FINE ROMANCE, in which she played alongside the actor Michael Williams, whom she married in 1971. She has since made nine series of another sitcom, AS TIME GOES BY (with Geoffrey Palmer), as well as plays and classic serials such as CRANFORD. In the cinema her films have ranged from LADIES IN LAVENDER (opposite Maggie Smith) through NOTES ON A SCANDAL with Cate Blanchett to SHAKESPEARE IN LOVE, in which she played Queen Elizabeth, a role which gained her a Hollywood Oscar. But it is her role as 'M' in seven James Bond films that has gained her worldwide recognition. This book is, however, much more than a career record. Her marriage to Michael Williams, their daughter, and her impish sense of humour contribute vividly to her account of more than half a century as Britain's best-loved actress. 32

Judi Dench is the foremost actress in British theatre. She was first acclaimed in 1960 as the Juliet for her generation, in the controversial Franco Zeffirelli production of ROMEO AND JULIET at the Old Vic. Her stage career has included productions with the RSC, National Theatre, West End and tours all over the world.She has triumphed in great Shakespearean leads, and on television and film, she has won several awards including an Oscar for her Queen Elizabeth I in SHAKESPEARE IN LOVE and a BAFTA for her title role in IRIS. She was made a DBE in 1988 and a Companion of Honour in 2005. Most recently she has starred in a diverse range of films including THE BEST EXOTIC MARIGOLD HOTEL, SKYFALL and the multi-Oscar-nominated PHILOMENA, the hit BBC TV series CRANFORD and alongside Ben Whishaw in PETER AND ALICE on stage in the West End.