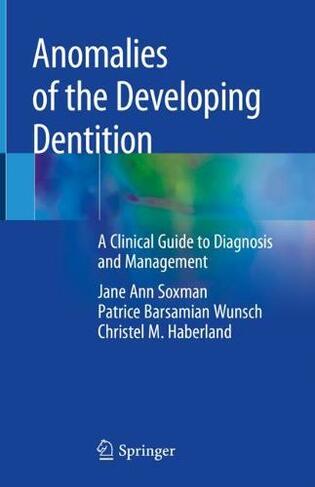 Anomalies of the Developing Dentition A Clinical Guide to Diagnosis and Management 1st ed. 2019

This book is an up-to-date, succinct, and easily accessible reference on the diverse anomalies that may arise in the developing dentition, including those relating to crown size and shape, tooth formation, tooth eruption, tooth number, and enamel and dentin formation. For each anomaly, information is provided on clinical and radiographic features, etiology, and management. Attention is also drawn to clinically relevant associations among anomalies. The inclusion of numerous high-quality photographs and images will assist the practitioner in establishing the correct diagnosis in each patient and in understanding the rationale for specific interventions. The book will also facilitate discussion of the anomaly with the caregiver or patient, including with respect to genetic and other implications and the appropriate treatment path. Anomalies of the Developing Dentition is an excellent clinical guide to the subject that will aid in timely identification and appropriate management. It will meet the needs of students and practitioners in multiple disciplines of both medicine and dentistry. 88 Tables, color; 88 Illustrations, color; 72 Illustrations, black and white; XIV, 141 p. 160 illus., 88 illus. in color.