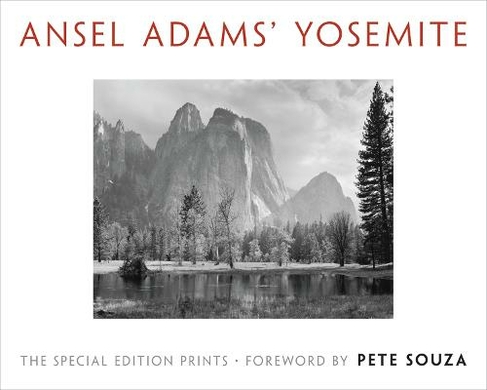 Also available on eBook for £16.99. Click here to purchase from Rakuten Kobo

This new book of Ansel Adams photographs, the first in five years, is a personal and powerful look at Ansel Adams' Yosemite - featuring a sequence of photographs assembled throughout Adams' lifetime that have never before been collected in book form. The photographs of Ansel Adams are among America's greatest cultural treasures but Adams' most enduring legacy may be the work he undertook to preserve our natural wilderness. In 1958, Ansel carefully selected six photographs of Yosemite National Park to exhibit and sell in support of turning tourists into activists - to further the Park's environmental mission. Over time, he added more photographs to the collection, which numbered 30 prints at the time of his passing. This group of photographs, the Yosemite Special Edition Prints, form the core of this essential volume. They have never before been published together and today - as America's parks are threatened as never before - these images of our majestic wilderness carry immense power and exquisite beauty. It was in Yosemite that Ansel fell in love with the landscape of the American West and his luminous images of its unique rock formations, groves, clearings, trees and more are some of the most distinctive of his career. Carefully reproduced from Adams' original negatives according to his exacting standards, ANSEL ADAMS' YOSEMITE is a contemporary reflection of Adams' artistic and political legacy and is a seminal book on the rich history and value of environmental conservation. 100 Duotones

Ansel Adams (1902-1984) was the most honored American photographer of the twentieth century. Through the exhibition and publication of his work, his writings, and his leadership in the Sierra Club, Adams was also a prescient and highly effective voice in the fight to preserve America's remaining wilderness. Pete Souza was the Chief Official White House Photographer for President Obama and the Director of the White House Photo Office. Previously Souza was an Assistant Professor of Photojournalism at Ohio University, the national photographer for the Chicago Tribune, a freelancer for National Geographic, and an Official White House Photographer for President Reagan. His books include the New York Times bestsellers Obama: An Intimate Portrait and The Rise of Barack Obama. Souza is currently a freelance photographer based in Washington, D.C., and a Professor Emeritus at Ohio University's School of Visual Communication.