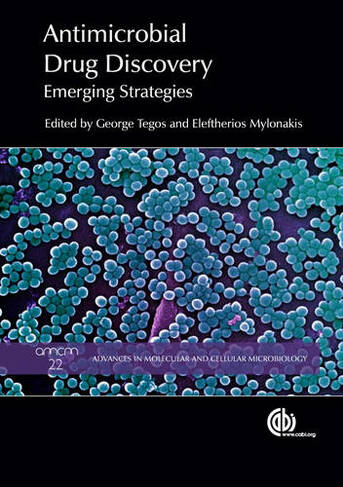 Drug resistance is increasing among a variety of human pathogenic microorganisms such as Enterococcus faecium, Staphylococcus aureus, Klebsiella pneumoniae, Acinetobacter baumaniii, Pseudomonas aeruginosa and Enterobacter spp. (currently dubbed the 'ESKAPE' pathogens), and has emerged as one of the most important clinical challenges of this century. Increased general awareness and fear of these pathogens means there is a growing demand for research to tackle the threat of multidrug resistance. Documenting the latest research in the field, this book discusses current and promising activities to discover new antimicrobials in five key areas: molecular genetics and systems microbiology; synthetic, computational chemistry and chemoinformatics; High Throughput Screening (HTS); non-vertebrate model hosts; and light- and nano-based technologies.

is an Assistant Professor at the Department of Pathology School of Medicine at the University of New Mexico affiliated with the Center of Molecular Discovery and a Visiting Scientist at the Wellman Center for Photomedicine at Massachusetts General Hospital, Harvard Medical School. He was trained as a molecular microbiologist and received his PhD from the University of Ioannina, Greece. He completed postdoctoral fellowships in Molecular Microbiology (Antimicrobial Discovery Center at Northeastern University, 2001-2003) and Translational therapeutics in Dermatology (Wellman Center for Photomedicine, Harvard Medical School at Massachusetts General Hospital, 2003-2006). His research interests lie in the areas of drug discovery and development of antimicrobial strategies with an emphasis in photodynamic therapy (PDT) for infections and multidrug efflux systems, as well as virulence and microbial pathogenesis. In 1997 he was awarded a European Union Marie Curie Fellowship in Biotechnology, and in 2008 became a founding member of the European Union Cost Action, ATENS, for the reversal of "drug resistance by inhibition of efflux pumps". In the same year he was awarded the Massachusetts Technology Transfer Center (MTTC) Award in Antimicrobials and Biotechnology. Tegos has published 50 peer-reviewed articles, over 50 conference proceedings, book chapters and international abstracts and holds 3 patents. He is also the associate editor for two journals, and recently chaired a session for antifungal drug discovery and repurposing in the 10th Annual Meeting South Central Medical Mycology. is a physician-scientist and his work focuses on the study of microbial pathogenesis and drug discovery. His research has developed a novel alternative to studying bacterial and fungal infection and host responses: the use of invertebrate model hosts. These surrogate invertebrate hosts fill an important niche in fungal pathogenesis research. His investigations have identified novel virulence factors, cross kingdom pathogen-pathogen interactions, novel antifungal agents and evolutionarily conserved traits that are involved in host virulence and immune responses during infection. Recently, Dr. Mylonakis implemented high-throughput whole-animal Caenorhabditis elegans assay to screen libraries of chemical compounds and identify those with antimicrobial activity. In vivo evaluation of libraries of chemical compounds could solve some of the main obstacles in current antifungal discovery, such as finding new classes of compounds and solving the bottleneck of toxicity/efficacy testing. This approach challenges the position that studies in fungal pathogenesis should focus on the analysis of the "host", the "pathogen", or the "antimicrobial compound".Dr. Mylonakis has published over 150 articles in the scientific literature and his studies have been supported by peer-reviewed grants from the National Institutes of Health and private foundations. He is the founding Editor-in-Chief of the journal Virulence and serves on the editorial boards of many publications and as an ad hoc reviewer for over 40 journals.