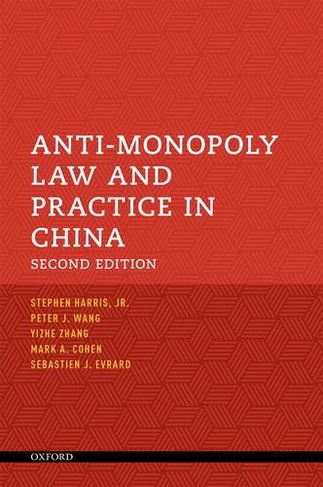 Anti-Monopoly Law and Practice in China was the first treatise on the China Anti-Monopoly Law (AML), and remains the most comprehensive work on this legislation. It provides a thorough explanation of the law as well as regulations promulgated under the law, agency practices, and other relevant Chinese laws that may also apply to anti-competitive conduct. The book considers each chapter of the law in detail, offering a ready reference to each of the law's substantive provisions: monopoly agreements; abuse of dominance; merger control; cases involving government-related entities, including administrative monopolies, state-owned enterprises, and trade associations; intellectual property rights, abuses, enforcement, and remedies; the structure, powers and duties of the enforcement agencies, the Anti-Monopoly Commission (AMC) and Anti-Monopoly Enforcement Authorities (AMEA); the role of the courts; and the intersection with other competition-related laws. The work adopts an international and comparative approach to the law, drawing similarities and differences with the antitrust law of the United States and the competition law of the European Union, among others, to provide a richer understanding of how the China Anti-Monopoly Law compares with the laws of established jurisdictions. The book sets out the legislative history and context of the AML, and also includes the texts of selected relevant regulations, rules, and guidelines, to provide a comprehensive guide in a single volume. Anti-Monopoly Law and Practice in China is an accessible and invaluable reference source for practitioners and scholars alike, offering the reader a complete and detailed account of this relatively new and highly significant antitrust regime.

H. Stephen Harris, Jr. is a partner in the Antitrust & Competition Law practice at Winston & Strawn, based in Washington, DC and New York. He participated in early symposia with Chinese officials and scholars during the drafting of the Anti-Monopoly Law and has frequently lectured and written about the law. Steve has assisted numerous companies with antitrust and competition issues in numerous jurisdictions, including the U.S., EU, China, Japan, and Korea.Peter J. Wang is Partner-in-Charge at the Shanghai office of Jones Day. He handles complex disputes and antitrust matters in China, the United States, and worldwide. He leads Jones Day's antitrust practice in China and has extensive knowledge of both Chinese and U.S. antitrust matters.Yizhe Zhang is a Partner at Jones Day, in the Beijing office. Before joining the firm, she worked for China's Anti-Monopoly Office of the Ministry of Commerce (MOFCOM) and was heavily involved in the drafting of the PRC Anti-Monopoly Law and other regulations for foreign mergers and acquisitions.Mark A. Cohen is Senior Counsel for the United States Patent and Trademark Office (USPTO), leading the China team, and a Guest Professor to the IP Faculty at the Renmin University of China.