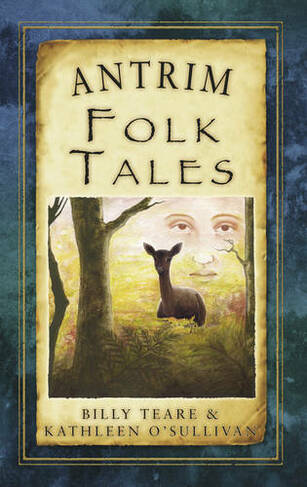 By Billy Teare (Author), Kathleen O'Sullivan (Author)
Paperback
https://www.whsmith.co.uk/products/antrim-folk-tales/billy-teare/kathleen-osullivan/paperback/9781845887865-01-000.html £11.95 rrp £12.99 Save £1.04 (8%)
GBP
Availability
Currently unavailable. We don't know when or if this item will be back in stock
Free Saver Delivery on orders over £20
Details
FREE SHIPPING over £20 for Saver Delivery
Share

County Antrim, home to the Giant's Causeway, has a rich heritage of myths and legends which is uniquely captured in this collection of traditional tales from across the county. Featured here are stories of well-known figures from Irish folklore, including Conal Cearnach, with his association to Dunseverick Castle, and Deirdre of the Sorrows, whose mournful plight is linked to the rock at Ballycastle, known as Carraig Usnach. Here you will also find tales of lesser-known Antrim characters such as the heroic outlaw Naoise O'Haughan and local lad Cosh-a-Day, along with fantastical accounts of mythical creatures, including the mermaid of Portmuck, the banshee of Shane's Castle, and the ghostly goings-on in Belfast. These stories bring to life the county's varied landscape, from its lofty mountains to its fertile lowlands and dramatic coastline. 25 Illustrations, black and white

Billy Teare is one of Ireland's premier storytellers with an international reputation who has appeared on radio, television and the big screen, His previously published works include the award-winning More Ready to Tell Tales (2000). Kathleen O'Sullivan is a traditional storyteller and singer who has collaborated with Billy Teare for many years, adapting traditional tales along with writing new ones.

Antrim Folk Tales
Antrim Folk Tales
Billy Teare
Paperback
Currently unavailable. We don't know when or if this item will be back in stock
https://www.whsmith.co.uk/products/antrim-folk-tales/billy-teare/kathleen-osullivan/paperback/9781845887865.html £11.95 rrp £12.99 Save £1.04 (8%)
GBP