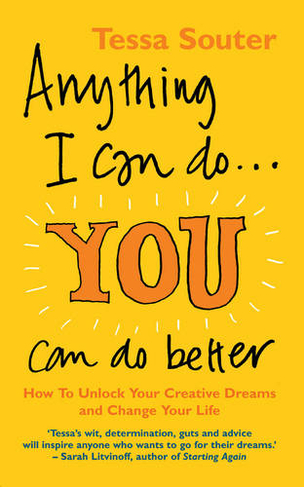 Anything I Can Do... You Can Do Better: How to unlock your creative dreams and change your life

Tessa Souter shows how she succeeded against the odds, how others have done it and how you can do it too. Part inspirational memoir, part secrets-divulging interviews with celebrities and others who have successfully pursued their dreams, this book will show how Tessa Souter took herself from teenage mother to successful sub-editor at a leading glossy magazine, to international journalist, and on to become a singer, performing in top jazz clubs, frequently to standing-room-only audiences in London, Los Angeles and New York. It will also explain exactly how other successful actors, film makers, photographers, painters, producers, writers, dancers and musicians achieved their goals. Anything I Can Do, You Can Do Better provides step-by-step strategies and advice, tackling such thorny problems as money and how to survive, negotiating intimate relationships, dealing with jealousy and competitiveness, taking care of the children, as well as practical suggestions and tips.

A runaway at 16, and a single parent by 18, Tessa worked through life's challenges to become a successful sub-editor at Elle UK. Later in life she gave it all up, moved to America and started from scratch in pursuit of a dream to become a writer, supporting herself by cleaning houses for two years. Joining the Writers' Grotto in San Francisco, Tessa eventually established herself as a respected international journalist working for the world's leading publications. A life-long desire to sing, however, prompted relocation to New York in 1996 and a third successful career that began with a scholarship to the Manhattan School of Music. Jazz legend Mark Murphy said of her: 'She's my next star.' Part of Tessa's personal story has been featured in British Vogue. Anything I Can Do...You Can Do Better, her first book, will be serialised in You magazine.