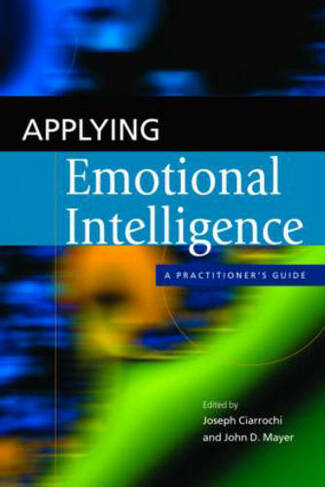 The explosion of research on emotional intelligence (EI) in the past decade has provided increasing evidence that EI can be measured reliably and can be useful in predicting important outcomes, such as managerial effectiveness and relationship quality. Naturally, people are now asking, "So, how does one improve EI?". Applying Emotional Intelligence collects the most important programs focused on that idea, and enquires of their originators, "What do you do?", "Why do you do it?", and, "What is the evidence for your approach?". The emphasis of the book is applied, in that it provides and contrasts concrete examples of what we do in our interventions in a wide variety of situations. The chapters present descriptions of programs, including specific activities and exercises that influence emotional knowledge and social effectiveness more generally. While practical in its focus, this book also discusses the theoretical bases for these approaches. These are new programs with outcomes that are now beginning to be studied. The book presents the most important and recent research findings that examine the efficacy of these programs. Applying Emotional Intelligence is a "must-read" for anyone interested in EI and its application. This book will be of interest to researchers conducting EI intervention research, as well as a wide variety of practitioners, including those interested in developing EI in organizations, health areas, clinical populations, and school-age settings. Finally, the book is designed to be relevant to the reader's own life, encouraging the reader to consider how the programs and the exercises might impact his or her personality and outlook, as well as contribute to the development of those who have themselves participated in the programs. 25 Line drawings, black and white; 5 Halftones, black and white; 3 Tables, black and white; 30 Illustrations, black and white

Joseph Ciarrochi received his Ph.D. degree from the University of Pittsburgh, a postdoctoral fellowship in emotion research from the University of New South Wales, and currently has a position as lecturer in psychology at the University of Wollongong. He has been conducting cutting-edge research in how emotions influence thinking and behavior and how emotional intelligence can best be measured and used. His findings have been published in the top journals in psychology and have been presented at numerous international conferences. Dr. Ciarrochi is currently evaluating training programs that are designed to increase people's social and emotional intelligence.John (Jack) D. Mayer received his B.A. degree from the University of Michigan, his M.A. and Ph.D. in psychology at Case Western Reserve University, and then attended Stanford University as a National Institute of Mental Health Post-doctoral Scholar. Dr. Mayer has served on the editorial boards of Psychological Bulletin and Journal of Personality. He has published numerous scientific articles, book chapters, psychological tests, and books. His articles, with Salovey, in the early 1990s are often credited with beginning research on emotional intelligence.