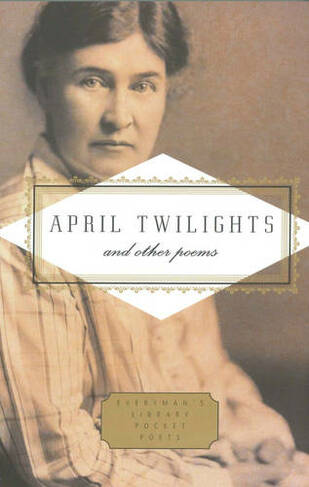 April Twilights and Other Poems

One of the foremost American novelists of the early twentieth century, Willa Cather (1873-1947) was born in Virginia but grew up in Nebraska. Before she wrote the novels that would make her famous, she was known as a poet, the most popular of her poems reprinted many times in national magazines and anthologies. In such lyrical poems as `Prairie Dawn', `The Hawthorn Tree,' `Going Home' and `Winter at Delphi', Cather exhibits both a finely tuned sensitivity to the beauties of the physical world and a richly symbolic use of the landscapes of myth. The themes that were to animate her later masterpieces found their first expression in these haunting, elegiac ballads and sonnets. Cather's O Pioneers! and My Antonia are already available in Everyman's Library.

Novels by Willa CatherAlexander's Bridge 1912 O Pioneers! 1913 The Song of the Lark 1915 My ntonia 1918 One of Ours 1922 A Lost Lady 1923 The Professor's House 1925 My Mortal Enemy 1926 Death Comes for the Archbishop 1927 Shadows on the Rock 1931 Lucy Gayheart 1935 Sapphira and the Slave Girl 1940 Short FictionThe Troll Garden 1905 Youth and the Bright Medusa 1920 Obscure Destinies 1932 The Old Beauty and Others 1948 Willa Cather's Collected Short Fiction, 1892-1912 1965 Uncle Valentine and Other Stories- Willa Cather's Uncollected Short Fiction, 1915-1929 1972 Introducer Biography- Elaine Showalter is the author of the recent ground-breaking study of American women writers, A Jury of Her Peers, and the classic A Literature of Their Own- British Women Novelists from Bronte to Lessing.