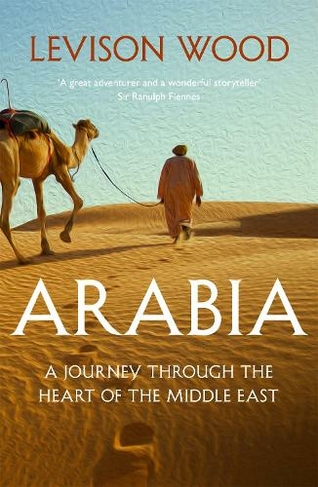 Arabia: A Journey Through The Heart of the Middle East

By Levison Wood (Author)
Paperback
https://www.whsmith.co.uk/products/arabia-a-journey-through-the-heart-of-the-middle-east/levison-wood/paperback/9781473676305-12-000.html £8.19 rrp £9.99 Save £1.80 (18%)
GBP
Availability
In Stock
Free Delivery Available When You Spend £25 Or More
Details
Spend £25 On Eligible Products To Receive Free Standard Delivery To You Home Or Free Next Working Day Click And Collect To Store
Share

Shortlisted for the 2019 Edward Stanford Award '[A] rollicking Boys' Own adventure' - Spectator 'This heart-stopping personal account of historic Arabia today.' - Compass Magazine Following in the footsteps of Lawrence of Arabia and Wilfred Thesiger, Arabia is an insight into Levison Wood's most complex and daring expedition yet: an epic and unprecedented 5000-mile journey through 13 countries, circumnavigating the Arabian Peninsula. Honest, reflective and poignant, Arabia is a historical, religious and spiritual journey, through some of the harshest and most beautiful environments on Earth. Exploring the Middle East through the lives, hearts and hopes of its people, Levison Wood challenges the perceptions of an often misunderstood part of the world, seeing how the region has changed and examining the stories we don't often hear about in the media.

Levison Wood is an award-winning author, explorer and photographer, whose books and documentaries have won critical acclaim around the world. Levison is the author of 7 books to date, including Walking the Nile and Walking the Americas, which were both Sunday Times bestsellers, and Walking the Himalayas which was voted Adventure Travel Book of the Year at the Edward Stanford Travel Writing Awards. His book Arabia was also chosen by Hudson Books as one of their Top Ten Non-Fiction Titles of 2019 in the USA.Levison's passion for adventure and discovering more about indigenous ways of life has taken him to over 100 countries. He served for several years as an Officer in the British Parachute Regiment, including an operational deployment to Afghanistan, where he fought Taliban insurgents in Helmand. He is an elected Fellow of the Royal Geographical Society, the Explorers Club and Visiting Fellow at Cass Business School.He has presented several documentaries, which have aired around the world, including 'Arabia with Levison Wood', which was shortlisted for Best Documentary Series at the Broadcast Awards 2020 and his latest series 'Walking with Elephants', which recounts a trek across Botswana following a herd of elephants to the Okavango Delta. Levison is a passionate conservationist and an ambassador for the charity The Tusk Trust.