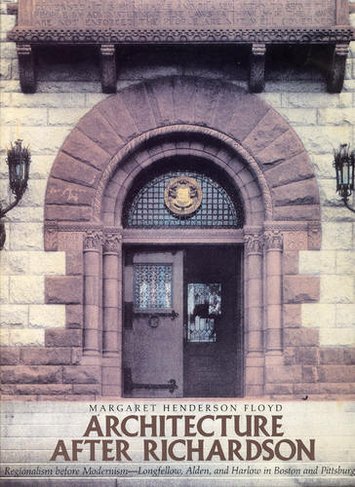 Architecture After Richardson Regionalism Before Modernism - Longfellow, Alden and Harlow in Boston and Pittsburgh 2nd ed.

Most histories of American architecture after H. H. Richardson have emphasized the work of Louis Sullivan and Frank Lloyd Wright in the Middle West. By examining instead the legacy of three highly successful architects who were in practice simultaneously in New England and Western Pennsylvania from 1886 into the 1920s, Margaret Henderson Floyd underscores the architectural significance of another part of the nation. Floyd critically' assesses the careers, works, and patronage of Alexander Wadsworth Longfellow, Frank Ellis Alden, and Alfred Branch Harlow. Longfellow and Alden were senior draftsmen in H. H. Richardson's office, and Harlow worked with McKim, Mead & White in New York, Newport, and Boston. After Richardson's death, the three set up their own practice with offices in Boston and Pittsburgh, and these offices eventually became two separate practices. Over the years, their commissions included scores of city and country residences for the elite of both regions as well as major institutional and business buildings such as those at Harvard and Radcliffe, the Cambridge City Hall, and Pittsburgh's Duquesne Club and Carnegie Institute. Placing these architects in a broader context of American architectural and landscape history, Floyd uncovers a strong cultural affinity between turn-of-the-century Boston and Pittsburgh. She also reveals an unsuspected link between the path of modernism from Richardson to Wright and the evolution of anti-modern imagery manifested in regionalism. Floyd thus combines her analysis of the work of Longfellow, Alden, and Harlow with a critique of mid-twentieth-century historiography to expose connections between New England regionalism, the arts and crafts movement, and such innovators as Frank Lloyd Wright and Buckminster Fuller. 350 halftones, 100 line drawings