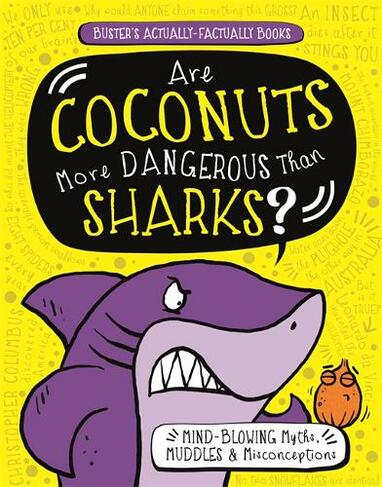 By Guy Campbell (Author), Paul Moran (Author)
Paperback
https://www.whsmith.co.uk/products/are-coconuts-more-dangerous-than-sharks-mindblowing-myths-muddles-and-misconceptions-busters-actuall/guy-campbell/paperback/9781780555119-12-000.html £8.19 rrp £9.99 Save £1.80 (18%)
GBP
Availability
In Stock
Free Delivery Available When You Spend £25 Or More
Details
Spend £25 On Products To Receive Free Standard Delivery To Your Home Or Free Next Working Day Click And Collect To Store

Guy Campbell (Author) Guy Campbell has been a writer and graphic designer since 1986. He started the Creative and Graphics company Moran Campbell da Vinci in 1990 producing corporate ID, advertising (newspapers, magazines, point of sale, posters) and packaging (specialising in toys) for, among other clients, Harrods and Hamleys. Writing credits has included over 40 books for children, a monthly comic for children, hundreds of cartoon strips for newspapers and magazines worldwide, puzzles for books, newspapers and magazines, comedy sketches for TV and a short comic play for BBC radio 5.Paul Moran (Author) Paul Moran is a UK-based illustrator who has many years of experience in producing artwork for books, magazines and toys using both digital and traditional techniques.He is the illustrator of the Sunday Times Bestseller Where's the Unicorn?, along with other highly successful Michael O'Mara titles such as Where's the Meerkat?, Where's the Zombie? and Where's the Llama?